Amid worsening fine dust conditions, some parents are paying for air purifiers at schools out of their own pockets as nearly half of Korean classrooms lack them.

According to the Ministry of Education and the Ministry of Health and Welfare, out of 12,034 elementary, middle and high schools in Korea, 47.8 percent do not have air purifiers in classrooms. 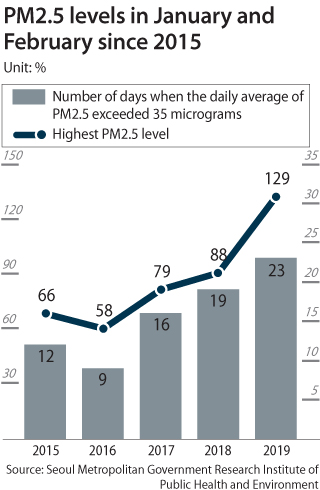 Breaking down the statistics by schools, 25.1 percent of elementary schools, 74.3 percent of middle schools, 73.7 percent of high schools and 3 percent of kindergartens throughout the country do not have air purifiers in classrooms.

By area, some 60 percent of schools in North Gyeongsang, North Jeolla and Daegu and around 40 percent in Seoul do not have air purifiers.

“My daughter tells me every day after coming home that it’s hard to concentrate in class because her eyes sting and her throat hurts,” said Kim Mi-yeon, a 42-year-old resident of Gangnam District, southern Seoul. “The school ought to buy air purifiers and place them in classrooms as the air pollution worsens.”

Some parents have started paying to provide schools with air purifiers.

“There is an air purifier at the day care center that my daughter attends that was provided by the local government,” said Kim Jee-hee, a 37-year-old mother.

“But one day, I went in and checked the air quality indoors using my own measuring device, and the air pollution inside was as bad as it was outside. So I went ahead and bought a better air purifier and placed it in the classroom.”

Lee Ji-won, whose daughter turned nine this year, also bought an air purifier for her class.

“My daughter has very strong allergic reactions to fine dust,” Lee said. “On bad days, she can barely breathe through her nose. She had to stay at home 30 days last year because of worsening air pollution. She stayed home yesterday, too.”

The daily average PM2.5 fine dust level broke the record in Seoul on Tuesday, hitting 135 micrograms per cubic meter of air, the highest since 2015, when data was first recorded. The second-highest level was on Jan. 14, when the day’s average PM2.5 level in Seoul reached 129 micrograms.

President Moon Jae-in told Minister of Environment Cho Myung-rae on Tuesday to look into the state of air purifiers at schools.

“The government is installing air purifiers in day care centers, kindergartens and schools, but the number of air purifiers is too small to cover everyone,” he told Cho, according to the Blue House. “The children need to feel safe, at least while indoors.”

Moon ordered the ministry to come up with a way to pay for air purifiers in as many schools and as fast as possible.

The ministry’s think tank, the National Institute of Environmental Research, forecasted that unhealthy levels of fine dust will carry on into today in most areas, with the exception being Gangwon and some southern regions, including Busan, Ulsan and Jeju.

In Seoul during January and February - which is becoming the worst time of year for fine dust - the number of days when the daily average PM2.5 level was higher than 35 micrograms rose from nine in 2016 to 16 in 2017, 19 in 2018 and to 23 in 2019, according to the Seoul city government’s Research Institute of Public Health and Environment.

“The stagnant air over the Korean Peninsula and the inflow of fine dust particles from China’s Shandong region appears to be worsening the air pollution in Korea,” the institute said in a report released Wednesday. “According to our research, the average fine dust level in Beijing and Shenyang - whose air quality can have an impact on the Korean Peninsula - in January and February rose around 23 percent compared to the same period last year.”