Korea hopes to rule the rink in short-track finale

Korea hopes to rule the rink in short-track finale 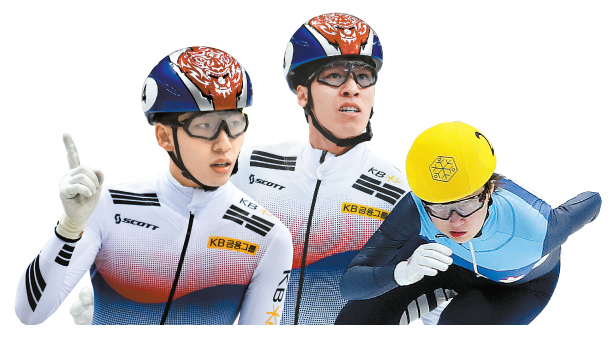 A total of 10 Korean skaters - five female and five male - will compete this weekend. The championship races will start with qualifying rounds today.

In the women’s team, Choi Min-jeong has set her sights on winning the championship title for a second consecutive season. Last year, Choi dominated the World Championship, winning three of the four races to top the overall ranking. Her string of victories was redemptive for Korea as the women’s team had finished with only two gold medals the previous year - Choi’s victory in the women’s 1,500 meters and the 3,000-meter relay.

Choi is one of the most successful skaters at the World Championship. In the past four years, Choi has won the overall World Championship title three times - winning in 2015, 2016 and 2018. If Choi wins another overall title, she will become the third woman ever to do so.

But it won’t be easy. During the third leg of the World Cup race in December last year, Choi injured her ankle after tripping over a competitor’s skates during the race. Choi has been rehabilitating and still competing, she hasn’t fully recovered.

Along with Choi, Shim Suk-hee also hopes to make her comeback at the World Championship. For Shim, this season has been especially difficult because of issues off the ice rink. The two-time Olympic gold medalist accused her former coach Cho Jae-beom last year of physically abusing her, for which he has been sentenced. This year, she also accused him of raping her multiple times in a scandal that has rocked Korea’s sports community.

Shim has continued to compete with the Korean national team throughout this season. Although she hasn’t performed her best, Shim is hoping to return to form at the World Championship. She is currently the defending champion in the 1,000 meters.

While the top two short trackers have struggled, Kim Ji-yoo has slowly climbed up the ranks, positioning herself as Team Korea’s next elite short track star. Kim enters the tournament as the highest ranked Korean skater in the overall world ranking, at third.

The men’s team is expected to have a quite competitive tournament this weekend. Lim Hyo-jun, the 2018 PyeongChang Olympics gold medalist in men’s 1,500 meters, enters the field as the top ranked skater in the overall world ranking. At the latest World Cup race in Turin, Italy, Lim picked up gold in the men’s 500-meter race to become the World No. 1 in the men’s 500 meters. Although Lim is the current No. 1 in the overall world ranking, he hasn’t won the overall title at the World Championships yet.

Yet looking at the recent performance, Hwang Dae-heon is expected to be a real threat for Lim. In Turin, Hwang won two races - the 500 meters and 1,000 meters.

This year, the men’s team made a successful generation change. Six skaters are ranked inside the top 10 and four of them are the top four skaters in the world ranking. Despite the fierce competition, the men’s team will have to miss Kim Gun-woo, No. 2 in the overall ranking and No. 1 in the men’s 1,500 meter, at the World Championship as he was caught trespassing in the women’s dormitory at the National Training Centre in Jincheon.

In addition to being the last event of the season, the World Championship is also likely the most competitive tournament for Korean skaters. The top Korean male and female skaters - assuming they finish within the overall top three - automatically earn their spot on the Korean national short track team for the 2019-20 season.