The two shortstops who dream of redeeming the Lions

The two shortstops who dream of redeeming the Lions

Tigers may have been extinct in Korea for nearly 100 years, but it was just a few years ago that lions’ roars echoed around the country every summer. Less big cat and more big at bat, the Samsung Lions dominated the KBO for decades with such ferocity that they only missed out on the playoffs five times between 1982 and 2016. 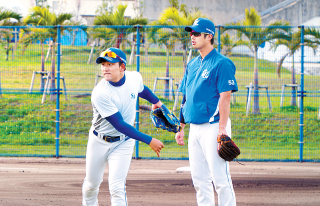 And then they disappeared.

From the top of the league that is. For the last three seasons, the Lions have struggled to make an impact, clawing their way back up the standing at the last minute last season, but failing to make the top five.

In the past three seasons, the Lions have finished ninth, ninth and sixth, the first time in the club’s history the team has not advanced to the postseason for three consecutive years. The Lions will once again make a bid to return from the depths of the table, and shortstops Lee Hak-ju and Kim Sang-su are both determined to lead the Daegu team back to greatness.

Unfortunately, there’s only room for one shortstop on any roster.

Lee was drafted by the Lions during the second round of the 2019 KBO rookie draft. As the Lions were certain they wanted Lee, they even embroidered his name onto a shirt ahead of the draft and presented it to him on the spot.

During his high school career at Chungam High School, Lee was quick to receive attention from scouts with his fast feet and strong shoulders. Following an impressive high school career, Lee skipped the KBO in favor of the United States, signing with the Chicago Cubs in 2009.

Having made fast improvements in the minors, Lee transferred to the Tampa Bay Rays in 2011, where he continued to play in the minors and was once ranked among the 2012 Top 100 MLB Prospects. It seemed like just a matter of time before he debuted in the big leagues.

Yet an injury forced Lee to give up his dreams. Lee injured his ACL while sliding in defense in 2013. The injury was so serious that he needed to get surgery, and the resulting rehabilitation robbed him of his final shot at the MLB.

As a result of the traumatic injury, Lee returned to Korea. Due to a restriction that means major league returnees who have never played in the KBO have to wait two years, Lee played for an independent league team in Japan, patiently awaiting the end of his probation period.

Lee was also exempted from mandatory military service because of his knee surgery.

Although Lee believes that there’s a lot more that he needs to improve on, Lions’ manager Kim Han-soo is pleased with the new addition to the team.

But it’s not all good news for Kim Han-soo. As Lee has joined the Lions, the club’s shortstop Kim Sang-su will now have to compete with Lee to retain his spot in the roster. Kim has been the team’s starting shortstop since joining in 2009. Yet in the past few seasons, he has missed some games due to regular injuries.

Despite the injuries, Kim became the youngest player in the KBO to become a free agent (FA), which he did this year, and re-signed a three-year contract with the Lions at 1.8 billion won ($1.6 million).

As Lee left for the United States right after high school, the two players have never had a chance to get to know each other, despite being the same age.

Although they are competing for the same spot, Kim was still keen to help Lee adjust to the team.

“I’m glad Hak-ju joined the team,” Kim said “He’ll be a great help to our team.”

Lee was also quick to befriend his new teammate.

“I want to play with Sang-su.”

The compromise the Lions have designed to opt for is to assign one player to second baseman. In practice games, they’ve been rotating the two players between second base and shortstop.

Defense isn’t the only area where Kim and Lee have developed a friendly rivalry. In the team’s intramural blue versus white game, Kim hit two home runs while Lee hit a home run and two three-base hits.

Then, during the Lions’ practice game against the LG Twins on Feb. 27, the two players combined for five hits, playing as seventh and eighth in the batting lineup.

“They both have good sense in baseball and have great shoulders,” said Lions manager Kim Han-soo.

“Although one of the two players will need some time to adjust to playing second base, they shouldn’t have big problems. I’ll assign their positions after watching the practice games. They will play their assigned positions starting from the exhibition games.”