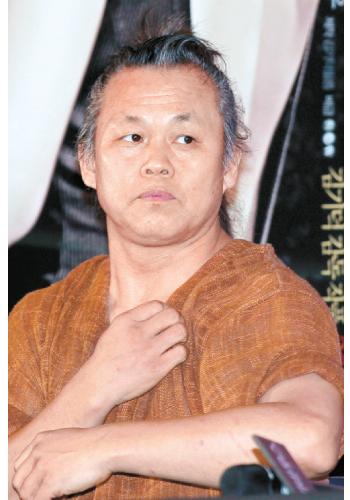 A group of women’s rights organizations held a press conference on Thursday to call out film director Kim Ki-duk for reporting the group Korea Womenlink to the prosecutors’ office for defamation in February.

After an anonymous actor told people in 2017 that she had been slapped and forced to touch another actor by Kim while shooting the 2013 movie “Moebius,” a streak of similar testimonies followed during the surge of Me Too revelations last year.

Kim, however, denied the reports and instead filed a defamation suit against the actors, as well as the director of MBC’s “PD Notebook,” which aired a program featuring the victims.

He was only fined for slapping the actor, while the actors whom Kim had filed a defamation report against were ruled not guilty.

When it was revealed last month that Kim’s latest movie, “Human, Space, Time and Human,” was going to open the Yubari International Fantastic Film Festival, Korea Womenlink demanded that the festival withdraw the decision.

On Feb. 12, Kim asked Korea Womenlink for compensation of 300 million won ($265,810), for having defamed his name by reporting him as a sexual criminal to the international film festival.

Thursday’s press conference held at the Korea Sexual Violence Relief Center was put together by the joint group, consisting of members from Womenlink, the Korea Sexual Violence Relief Center, The Association of Korean Independent Film & Video, the Federation of Korea Movie Workers’ Union and the director of MBC’s “PD Notebook.” Together, they stated that they will “take strong action against director Kim, who is constantly threatening his victims and their supporting organizations.”

“A lack of evidence means that there was not enough evidence to prove that damage was done, not that it didn’t happen,” said the organizers of the press conference.

“We are going to take a firm stance against people who wish to silence victims and people who look for justice. Kim Ki-duk himself infringed on people’s human rights on his set, and he defamed himself.”

The Yubari International Fantastic Film Festival has not revoked its decision to open the festival with Kim’s movie.