Korean consumers weren’t afraid to keep their cool this winter, with sales of cold food and beverages at convenience stores and franchise cafes shooting up. A recent trend to continue to eat or drink cold products even in the middle of winter is seen as the driving force behind the sales boost. 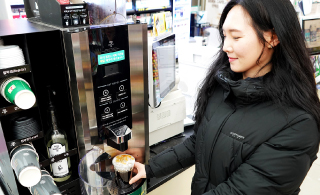 A customer gets her iced coffee at a 7-Eleven convenience store. [7-ELEVEN]

From March of last year through February, sales of hot coffee at 7-Eleven’s Seven Cafe rose by 16.3 percent on year while sales of ice coffee skyrocketed 49.7 percent during the same period.

By season, sales of ice coffee from spring to autumn grew by 42.8 percent on year, but shot up by 140.4 percent in winter - measured from December to February - led by strong demand from consumers in their 20s. Ice coffee sales in that age group grew by 281.5 percent.

Sports drinks, also popular in summer, led beverage sales, jumping up 48.1 percent on year in the winter. Sales of water and soft drinks also increased by 22 percent and 19.7 percent.

“As much as convenience stores are directly connected to consumers’ daily lives, [our sales] reflect the changing consumption trend,” said a spokesperson from 7-Eleven, adding that the recent trend to drink or eat iced products despite the freezing weather was reflected in convenience store’s sales in winter.

The highest daily temperature this winter was 4.7 degrees Celsius (40.46 degrees Fahrenheit), which is around three degrees higher than the 1.8 degrees Celsius the previous year.

Sales of iced Americanos at Starbucks in January spiked by 40 percent compared to the same period a year ago. Sales of cold drinks in general increased by 20 percent on year.

Starbucks is not the only franchise cafe that has enjoyed the trend.

From November to February, Ediya Coffee sold 1.58 million more iced Americanos than during the same period the previous year, showing a 37 percent growth. Sales of iced drinks in general also went up by 36 percent. Iced drinks sold at A Twosome Place, another coffee franchise, increased 28 percent on year.

Industry insiders point to warmer temperatures and office workers’ preference to drink cool beverages in warm offices as the core reasons for the recent trend.

“People with a strong taste for food [and drinks] often form a club, and that includes people who would consume hot drinks even in the scorching summer,” said a source from coffee industry.

People’s preference for iced beverages in winter is seen as part of the same trend, the source added.