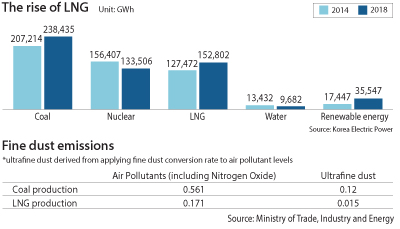 A government push to promote liquefied natural gas (LNG) over nuclear power and coal in a bid to resolve the fine dust crisis is facing criticism from experts and opposition lawmakers who say the proposed solution is not actually eco-friendly enough to solve the problem.

On Tuesday, a statement from the Ministry of Trade, Industry and Energy officially rebutted such claims.

“LNG releases only one-third of the air pollutants and one-eighth of the ultrafine dust that coal does,” the ministry said. “Moving forward with our nuclear power-free initiative, we expect fine dust levels to decrease as we expand our renewable energy use and lower coal power production.”

“Although the government decided to reduce nuclear power production levels, it is impossible to substitute nuclear power with renewable energy right off the bat,” said Kang Seung-jin, dean of the Korea Polytechnic University Graduate School of Knowledge-Based Technology & Energy.

Questions remain over whether LNG is actually an environmentally-friendly power source. While it certainly produces fewer pollutants than fossil fuels, some experts argue that nuclear power is cleaner.

“LNG released only 1,690 tons of ultrafine dust in 2017 compared to 27,000 tons from coal plants,” said Choe Woo-suk, head of the electric power division at the Trade Ministry.

Yet LNG power generation does produce some ultrafine dust and pollutants because it still uses the same thermoelectric generating process as coal. The byproducts may be less, but they do still exist.

Depending on how old the facilities are, LNG plants can actually produce more ultrafine dust than coal power plants. In 2017, an LNG power plant in Bundang, Gyeonggi, emitted 46 grams of dust per megawatt hour - almost three times the 16 grams from Samcheok Green Power, Korea’s greenest coal power plant in Gangwon.

On the contrary, nuclear power plants don’t release any fine dust as the energy used for electricity comes from uranium fission. They also emit the least greenhouse gases. According to the Korean Nuclear Society, nuclear power produces 15 grams of carbon dioxide per megawatt hour, compared to 490 grams from LNG and 1,000 grams from coal.

“Although LNG is definitely more environmentally friendly than coal in terms of air pollution, it is unreasonable to call LNG a pollution-free source compared to nuclear power,” said Woo Jung-Hun, an environmental engineering professor at Konkuk University.

“We can’t believe [the data] at face value,” said Rep. Choe Yeon-hye of the Liberty Korea Party, a member of the National Assembly’s special energy committee. “For the same 1,000 grams of nitrogen oxides emitted by LNG plants, Korea only releases 79 grams of fine dust compared to 680 grams by European Union standards. … If we apply the European constant, it shows that LNG development essentially causes a fine dust crisis rather than solving it.”

The government is considering updating the conversion rate.