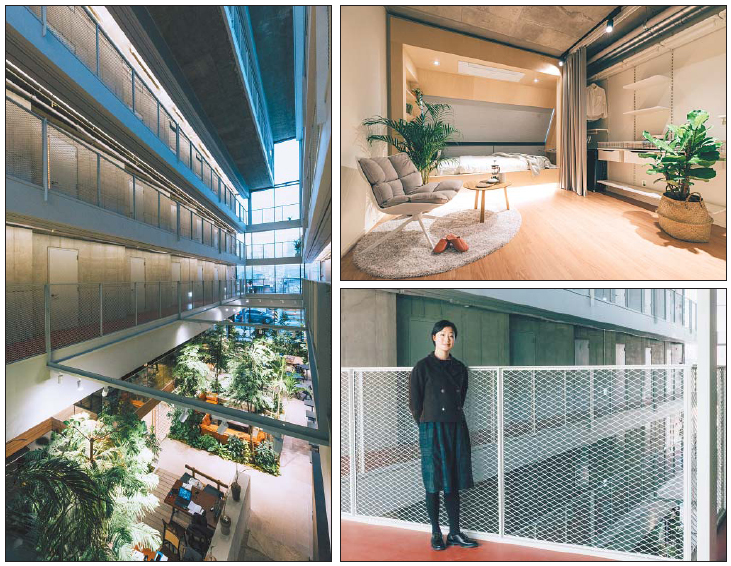 Left: The main feature of Common Life Yeoksam Treehouse share house is a seven-story atrium allowing all residents a line-of-sight view to common areas. Top right: The exterior of the building, and a room on the fourth floor. Bottom right: Melody Song. [ROH KYUNG, LEE JI-EUNG]

It’s an unusual structure for the Gangnam area, where land prices are some of the highest in the country. The eight-story, triangular building has a massive atrium running from the first to the seventh floor - so much nothing in a neighborhood where space is at a premium.

But this is, as they say, a feature, not a bug.

Common Life Yeoksam Treehouse, in Yeoksam-dong, Gangnam District, southern Seoul, is a share house that opened in late 2018. Large communal areas and the open design are the main selling points.

The building is different from most others. Each of the 72 apartments looks out over the atrium and is set either north or south of it. Contrast this with typical studio apartments, where the units open into a narrow corridor and occupants enter and exit the structure through a tiny lobby at best.

Residents of Treehouse can enjoy the cavernous space at the center of the building. And all units get exposure to sunlight, very different from most buildings, where only certain, prized units on high-floors and with southern exposure get significant natural light.

The Treehouse is built on a concept: this house is not just for me - it is for us.

It is the first share house from Kolon House Vision, a subsidiary of the Kolon Global Corporation, the construction affiliate of the Kolon Group, a diversified conglomerate.

The apartments are tiny. The floor area of the smallest room is 16.5 square meters, loft excluded. The largest is 36.4 square meters. Monthly rents run from 1.19 million won ($1,057) to 1.69 million won, maintenance fees excluded.

The common areas are generous. Kitchen facilities, lounge space, a study space, an office area and a laundry room are on the first and second floor.

The architect behind the Treehouse is Melody Song, 29, creative director of Kolon House Vision. Song studied at New York University and then Yale Graduate School of Architecture.

Lee Woong-yeol, chairman of the Kolon Group, recruited her in 2016. He saw buildings designed by Song in Itaewon, central Seoul, went directly to her, asking: “I want to build a share house for the young. How should I start?”

The JoongAng Ilbo sat down with Lee. The following is an edited excerpt of the interview.

Q.How did you respond?

A. I talked about a project I did at Yale. I studied the topic of co-living at the Graduate School of Architecture. I saw buildings where uniform-sized spaces were manufactured by factories. They were just blocks of small rooms. My goal was to build a house where people can live together and pay a reasonable rent. The chairman said that making a share house was something that he wanted to do, and he recommended I join the team of House Vision, which he had just established. My dream was to build a new type of residential area.

Accomplishing your dreams so quickly, you must be very lucky.

After my proposal was adopted, I was able to get this far. The proposal had everything - the design, the estimated budget and how the building will earn profit in the future.

The monthly rent for 16.5-square-meters room is 1.19 million won. Isn’t that too expensive?

The Treehouse is based on the One House concept. That means the price is for the whole space. Services for the community are included in the cost as well. Treehouse was opened in December, and already 48 households have moved in. Residents are mostly in their early 30s, and are global nomads, including those who studied abroad and foreigners. They are people who want to be members of a community.

Treehouse breaks existing market norms, where the size of the space and the price are usually proportional.

Mylo, a hobby and leisure app from a domestic start-up, surveyed 350 people. Half of them said that they are willing to pay the rent if the whole space is good, even though the room is small. In addition, around 50 percent of them said they do not own a car. The number of parking spaces per household at Treehouse is 0.6. That is the lowest ratio allowed by law. Instead, we offer a car-sharing service for the residents run by a start-up called Linkable. Since we did not dig too much underground for the parking lot, we saved on the cost of construction as well.

Isn’t it awkward to live together with others?

Of course it is not easy, but it is valuable. I believe that by living together, we can learn more than if we just live alone. Modern society results in loneliness in the crowd. If we live together, we can create synergies.