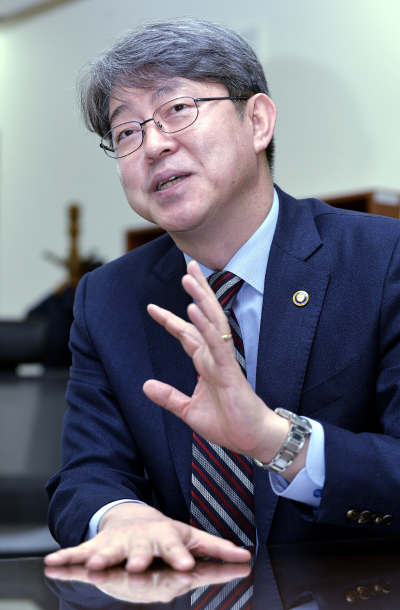 A prediction made by Kang Shin-wook, the commissioner of Statistics Korea, is stirring up controversy.

He said that the domestic economy peaked in the second and third quarters of 2017 and is currently heading downward.

His remark is implying that in the midst of a faltering economy, the Moon Jae-in administration implemented policies that hurt the economy, like raising the minimum wage and corporate taxes.

“If we confirm the specific time when the peak started this coming June, it means that the Korean economy has officially transitioned into a downturn since then,” he explained.

Kang said that it is hard to grasp statistically whether specific policies like the raise of minimum wage were causes for the downturn.
“The polarization between the have and have-nots has aggravated, but there are aspects where the government stopped things from getting worse by implementing policies,” said Kang.

Along with his detailed explanation of the state of the economy, he also refuted rumors that he possibly manipulated data due to external pressure from the government.

In addition, he emphasized Statistics Korea’s diverse efforts to broaden the spectrum and improve the quality of statistics to provide a better environment for the public to participate in the survey and adapt to changes in society.
Below are edited excerptions from an interview with Kang.

Q. How is the Korean economy doing, according to statistics?

A. Observing the trend in industries in 2018, investment in plants and equipment as well as the value of completed construction are on a downturn, and the increase in production in mining and manufacturing fell compared to 2017. The slowdown of production in the mining and manufacturing industries is also taking place in other developed countries, except for the United States. Yet, retail sales and production in the service industry increased. In the case of employment, there are negative sides, where the increase in employed people is slowing down, but there are also positive aspects where the employment rate of the young and the number of regular employees are continuously increasing.

The Coincident Composite Index and leading indicators are both falling for the longest time on record. It seems that the economy reached its peak and is gradually coming down.

If you see the cycle variation of the Coincident Composite Index, in the second quarter of 2017, it marked the highest, and for GDP, the peak was at the third quarter [of that year]. We are currently technically analyzing the data since the two figures peaked at different locations. We will release a tentative plan between March and April this year on which month in 2017 the economy hit peak. Then, after a consultation with experts, we are planning to decide the official peak as early as June.

The economic indicators, including employment, are not doing well.

I believe there are multiple reasons. To begin with, the manufacturing business is lagging behind. This even influenced the service industry. Other factors include the aftermath of technological innovation, like online replacing the offline. The change in population structure is also having an effect on the whole economy and society.

It seems that certain elements related to policy partly impacted the result.

I think you are talking about the rise of the minimum wage. It is difficult to know what kind of effect a specific policy, especially the effect of raising the minimum wage, has had on the economy. It is due to the fact that Statistics Korea does not produce data to judge whether [a policy] is good or bad. For instance, a limit exists as to how accurately [one can] analyze the current data to find out whether a person who became jobless received the minimum wage before or received more than that.

According to the result of a survey on the trend of households, the polarization of incomes is getting worse.

It is estimated that those in the lower income group are having a hard time getting a job. While the population and structure of the household has changed, the aged population has also become concentrated in the lowest-income bracket. It seems that the reason why the non-living expenditure, or mandatory payment including tax and insurance, per household increased last year is because the wage increased and the social security system expanded. Income provided from the government, including basic pension and child payments, is on the upswing. Due to diverse government redistribution efforts, I believe that this trend is highly likely to continue from now on.

The current administration has put a lot of energy into distributing income, so isn’t this a paradoxical result?

The government, in some sense, reduced the income gap by making use of policies. We can find this out by comparing the Gini coefficient based on market income without reflecting the redistribution policy and the Gini coefficient based on disposable income with the policy reflected. The difference between the two figures shows how much the inequality in the market reduced. Strong European countries in terms of welfare tend to have a big difference. In Korea, the figure is getting higher.

When you took office in 2018, opposition parties raised the possibility of external pressure in developing the statistics.

I think I have to be careful talking about this. Until now, some articles have occasionally put that word as an adjective in front of my name, but it is quite uncomfortable. The only thing I can say for sure is that it is impossible to produce statistics with a political interpretation in mind, and I have never thought of doing that. The system of Statistics Korea is not lax enough to permit that to happen. All sorts of statistics are produced, examined and are tallied via a thorough process.

The indices announced by Statistics Korea and how people feel about the economy in reality differ a lot.

We mostly announce the average, so each person can have distinct feelings toward [the economy]. A classic area where people have different opinions on is in the average price of products. The difference is huge depending on when and what kinds of products consumers buy. To begin with, we are trying to produce a variety of subsidiary indicators in order to close the gap. For example, in the case of price, people can refer to the price index of perishable goods, while in the case of employment, people can get complementary information through the potential unemployment rate. In addition, we are putting our efforts into providing the most recent information by shortening the period of announcing the indices to the public.

You examined imposing a fine when people decline to participate in a survey, but you withdrew it.

It is hard to survey on site since more of those surveyed have increasingly been uncooperative. Yet, our goal is to improve the system so that it feels more convenient and [those surveyed] could be more cooperative. First of all, we will introduce an online household account which identifies the transactional information of credit cards and bank account statements. The online household account can automatically enter the information in the system. The cash transactions cannot be skipped by the online household account and will be recorded by getting the receipts directly from Statistics Korea. We are planning to apply this as early as the second half of the year. We are currently discussing with related departments to raise the reward voucher from its current amount of 65,000 won ($57).

Currently, a way to collect financial information without the consent of users to disclose private information has also started.

It could be implemented if the National Assembly revises the related law. However, many have different opinions so the alternative is progressing slowly. Although the law has been revised, personal information will be strictly protected. Until now, in the process of writing and announcing the statistics, no private information was leaked. Using personal information is a crucial element in elevating the level of statistics. However, it is closely related to rights, so the discussion in the National Assembly should be a prerequisite.

The birth rate is declining and the elderly population is growing at a rapid pace.

We are planning to announce the result of an estimate of the future population in March by considering the change in the rate of marriage. The decrease in the aggregate population of Korea could start much earlier.

Do you have any plans to interact with North Korea?

We plan to specify the scope of support and schedule with the United Nations Fund for Population Activities to support the population census of North Korea that will be announced this year. This is indirect support, so it is unrelated to the sanctions on North Korea. However, it is impossible to directly interact with North Korea and give advice in designing the survey or educate them on ways to collect data, since that would go against the North Korea sanctions. Yet we need North Korea’s statistics while the relationship between North and South improves. If the sanctions on North Korea are lifted, through discussions with related departments, we will find areas that need help and issues on which we could cooperate with each other.

Are there any additional statistics you are developing?

We are going to actively use big data. It is possible to compare rush hour and the settled population of different metropolitan cities by using location information from cell phones. In addition, we plan to analyze the average price of eating out by referring to the number of deliveries on online delivery apps. The combination between credit information and public information using big data will allow us to give an analysis on the current status of loans and overdue loans of self-employed workers according to major businesses. Not only that, we can know how these self-employed workers have the money to buy a house, not to mention the characteristics of educational expenses according to gender, region and major. We are also going to utilize the data of rescue operations of firehouses and release statistics related to negligence accidents based on different regions and causes. The change in the industries should be reflected as well. For instance, there was no criterion to distinguish between a driver for Uber and a driver for Kakao T. We will take into consideration the revised plan of the International Labor Organization when measuring employment trends.