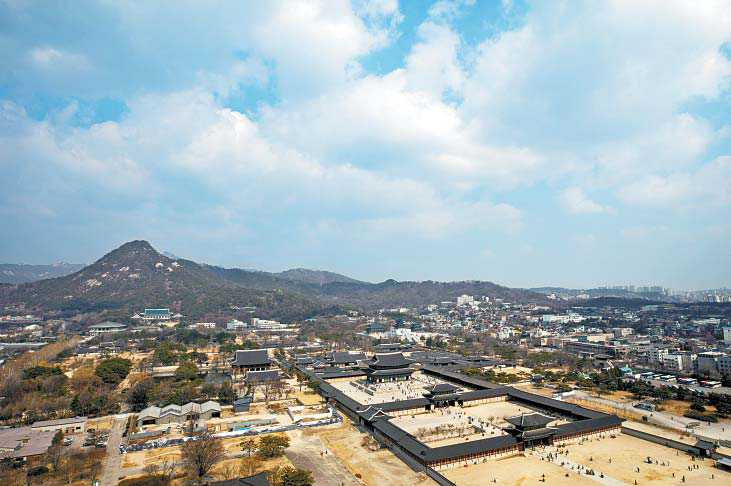 The sky over Mount Bugak in Seoul looks cleaner on Thursday after the level of fine dust dropped as a result of a strong north wind. [NEWS1]

Amid mounting public dismay over fine dust in the air, the Ministry of Environment said Thursday it will extend policies to ban more cars from roads on extremely smoggy days and work with Chinese authorities on artificial rain technology.

“We have been responding with a series of emergency fine dust reduction measures in times of unhealthy levels of fine dust in the air,” Minister of Environment Cho Myung-rae said in a press conference in central Seoul on Thursday, “But given the slow results, the ministry will also come up with new measures to bring about more immediate effects.”

Following the enactment of a special law to reduce fine dust in the air on Feb. 15, the ministry and local governments have been instituting emergency fine dust reduction measures when the daily average of PM2.5 fine dust particles exceed 50 micrograms per cubic meter of air on a day and is forecast to exceed that level the following day.

PM2.5 particles are particles less than 2.5 micrometers in diameter and about 30 times smaller than the width of a human hair. The World Health Organization (WHO) describes them as carcinogenic since PM2.5 particles can travel through the respiratory tract and reach the bloodstream, causing lung cancer and other lung problems as well as heart issues and strokes. The WHO recommends daily exposure to no more than 25 micrograms of PM2.5.

They will be expanded, according to the ministry.

“When emergency fine dust reduction measures have been initiated for three days in a row, all vehicles of public officials and all government vehicles will be banned from the road,” Cho said. “At the same time, operations at some 36,010 construction sites throughout the country will be halted.”

Cho added that he is aware of public concerns about fine dust from outside Korea and said the ministry will work with China to develop technology to induce artificial rain.

“The ministry is aware that the people’s attention is focused on the air pollutants coming into the country from outside,” Cho said. “Therefore we will be working with China to coordinate fine dust reduction measures and also to develop technologies and skills such as inducing artificial rain.”

President Moon Jae-in recently told his aides to look into combating fine dust with artificial rain in cooperation with China, according to the Blue House.

“China has superior technology and skills in artificial rain, so we may look into working with China on inducing artificial rain in the Yellow Sea,” Cho said.

The ministry held an artificial rain experiment last January in the Yellow Sea, but announced two days later that it failed to wash away fine dust.

Anti-Chinese sentiment appeared to be on the rise among some Koreans who have expressed distrust in the Chinese government, especially following the statements by the Chinese Foreign Ministry regarding fine dust in Korea.

“How, at this time, can you be talking about cooperating with China on research?” wrote one user on the Blue House’s petition website. “How can you trust them?”

“The statement by the Chinese Foreign Ministry that says there is no evidence that fine dust is flying into Korea from China is deplorable,” wrote another user. “It’s because the Korean government has failed to speak up to the Chinese government about the issue for so long.”

Chinese Foreign Ministry’s spokesperson Lu Kang asked in a press conference Wednesday if South Korea was “sure if their pollution is from China,” adding that the causes can be various and complicated.

Many Koreans believe the pollution is due to emissions from Chinese factories.

On Thursday, more than 180 people submitted petitions to the Blue House asking for the Moon administration to solve the fine dust problem. Many petitions mentioned China.

“Mr. President, we all know the majority of fine dust particles in the air in Korea are from China,” read one petition submitted Thursday. “Why can’t you talk to the Chinese government more openly about the issue?”

“There are reports that say 75 percent of fine dust particles in the air are from China,” another petition submitted Thursday read. “Talk to China, Mr. President. Talk to them about the factories they have built near the Yellow Sea.”

Although Korea has seen rising levels of fine dust for several years, this year and last have been the worst. The daily average level of PM2.5 particles broke the record in Seoul on Tuesday, hitting 135 micrograms, the highest since 2015, when data was first recorded. The second-highest level was on Jan. 14, when the day’s average PM2.5 level in Seoul reached 129 micrograms.

A fine dust alert, issued when the hourly average of PM2.5 is higher than 75 micrograms for more than two hours, was issued in Seoul for a full week from Feb. 28 to Thursday. It was lifted Thursday morning as the concentration reduced gradually.

The government forecast fine dust levels would stay at a moderate level, between 16 to 35 micrograms, throughout most of Korea today, except in southern Gyeonggi, Daejeon, Sejong, North Chungcheong and Daegu, where it could rise to 150 micrograms.