Kim gets one month ban for sneaking into women’s dorm

Kim gets one month ban for sneaking into women’s dorm

A male Korean short track speed skater on Friday received a one-month suspension from competition for trespassing in the female dormitory at the national training center. 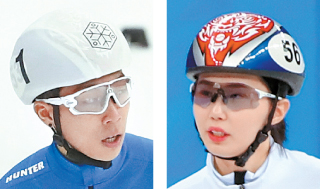 The Korea Skating Union (KSU) said Kim Gun-woo will be ineligible for all competitive skating for one month.

The ban is retroactive to March 3, when he was expelled from the Jincheon National Training Center in Jincheon, North Chungcheong, after getting caught inside the female dorm on Feb. 24.

He has also been ordered to complete 20 hours of community service.

Kim Ye-jin, a female short tracker who gave Kim Gun-woo an access pass to enter the area, received a reprimand and must perform 10 hours of community service.

Both had been skating on the national team during the 2018-2019 season, and the KSU had already stripped them of their positions and ruled them out of the world championships scheduled for this week in Bulgaria.

Kim Gun-woo’s absence is crucial as he’s having a strong season. Kim is currently ranked second in the International Skating Union overall world ranking and is the No.1 skater in men’s 1,500 meters.

With the suspension ending early next month, Kim Gun-woo will be able to skate in the national team trials for the 2019-2020 season, scheduled for April 3-4 in Seoul.

Separately, the Korean Sport & Olympic Committee last week banned Kim Gun-woo from re-entering the training center for three months and stopped Kim Ye-jin from going there for one month.