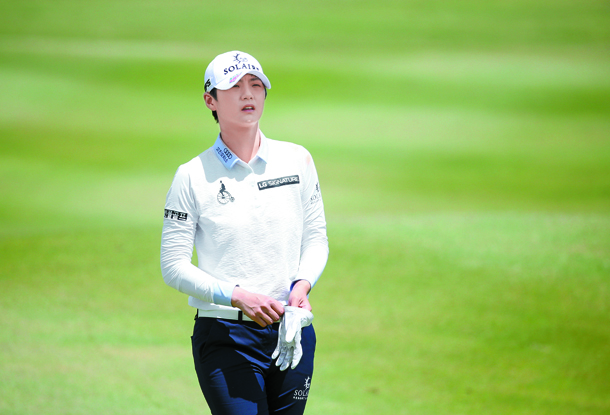 Park Sung-hyun prepares for her second shot during the final round of The Country Club Ladies Invitational on the Philippines Tour on Friday. [YONHAP]

World No. 1 Park Sung-hyun picked up her second win of the season, a wire-to-wire victory at The Country Club (TCC) Ladies Invitational in the Philippines on Friday.

Park, who started the final round four shots ahead of amateur Yuka Saso, didn’t have the best round, shooting two over par, 74, as she struggled with the strong wind. Despite an over par round on the final day, Park was still good enough to win the tournament two shots ahead of Saso. Park’s final round included three bogeys and a birdie and, with a two over par round, she finished the three-round tournament at seven under par, 209.

The TCC Ladies Invitational is a professional event but is not on the LPGA Tour. The win will have very little effect on Park’s world ranking.

Amateur player Saso finished runner up at five under par. Saso is a rising golfer in the Philippines and her recent achievement includes gold medals at the 2018 Asian Games in both the individual and team events.

With the win, Park won $15,000 in prize money. She donated all of the money to a Filipino charity. The win was another notch on her already impressive resume. Including 10 KLPGA and six LPGA victories, Park has now won a total of 17 tournaments as a professional golfer.

This was Park’s first Philippines Golf Tour event and she competed this week for her sponsor. This season, Park signed a new two-year sponsorship deal with Solaire Resort & Casino. Although this is comparatively smaller than the LPGA Tour events, her victory is still important as it comes the same week that she reclaimed the top spot in the world ranking.

Last weekend in Singapore, Park picked up her first win of the season at the HSBC Women’s World Championship in Singapore by overcoming a four-shot deficit from Ariya Jutanugarn of Thailand.

Park’s success this season has come much earlier. Although Park reached the No. 1 spot in the world ranking in her first two seasons on the LPGA Tour, she didn’t really find her stride until late in the season.

Following that victory, she missed the cut in three consecutive tournaments until, in June, she picked up her second victory of the season, a major tournament. Park then added another win in August to reach the No. 1 spot in the world ranking and maintained it until Jutanugarn overtook her in October.

But this year, in only her second tournament of the season, Park took home her first win. By winning her sixth LPGA Tour event, Park reclaimed the top spot in the women’s Rolex World Ranking, taking down Jutanugarn.

As her victory came a lot earlier than expected, Park’s goal of winning five tournaments, including a major, this year is looking more likely than ever.

Park has shown strong determination to win the LPGA Tour’s first major tournament of the season, the ANA Inspiration, which starts on April 4.

“Every year at that tournament, I repeat a pattern where I start toward the top of the leaderboard, and as the rounds go on, I fall behind the lead,” Park said.

“I have a lot of disappointment in that. In that tournament, the winner celebrates their win by jumping into the lake with their family and caddie. I want to continue playing well and I really want to jump into that lake.”

The LPGA Tour is currently on a two-week break and will resume at the Bank of Hope Founders Cup in Phoenix, Arizona from March 21 to 24.