Sweat - it’s not pretty and it’s not pleasant, but everybody does it. But while it’s little more than an inconvenience for most people, for professional athletes, a bit of sweat can ruin their game, and possibly even their career. 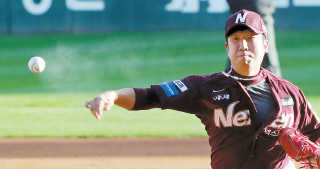 Shin Jae-young of the Kiwoom Heroes throws a pitch during the first playoff game against the SK Wyverns on Oct. 27. [ILGAN SPORTS]

Kiwoom Heroes’ Shin Jae-young knows a thing or two about sweat. The pitcher has long struggled with sweaty hands, a serious issue when your career relies on a good grip with a baseball.

This season, Shin need worry no more. After years of being held back by his perspiring palms, the Heroes star will head to the mound this year with dry hands and a solid grip.

Shin’s sweaty hands affected more than just his grip. The sweat caused blisters, especially in the middle of summer, making it difficult for him to hold the ball and occasionally forcing him to take an early shower.

The situation got so bad that Shin was willing to try anything. Putting extra rosin, the powdered resin used by pitchers, on his hands helped keep them dry, but so much so that he ended up with painful, cracked palms.

The next step involved a trip to the bathroom - dipping his hands in his own urine helped relieve the pain of the blisters, but it didn’t stop the sweating.

When urine and rosin didn’t work, Shin was out of options. Desperate to find a solution to stop the sweat, Shin turned to surgery. The surgery, which involved cutting open the sides of his abdomen to remove some nerves that trigger sweat glands, means that Shin should no longer suffer with sweaty hands on the mound.

This season, blisters will no longer hold Shin back. If the sweat and blisters really were the root of his problems, Shin has the potential to be one of the best starters in the league. Although he has struggled in recent years, the Heroes pitcher entered the KBO with explosive form in 2016.

Shin turned pro in 2012 after getting drafted by the NC Dinos, but it wasn’t until 2016 that he made his KBO debut with the Heroes. In his first year, Shin made an impressive debut, picking up 15 wins and seven losses with a 3.90 ERA in 30 games. Shin’s 15 wins were especially notable as he was the first rookie since Ryu Hyun-jin, now of the Los Angeles Dodgers, to reach the threshold.

This was good enough for him to win the Rookie of the Year award.

After an impressive rookie season, Shin wasn’t able to avoid the sophomore jinx. Shin picked up only six wins, seven losses and a save with a 4.54 ERA in 34 games, with his sweaty hands to blame for his pitching issues.

Last season, Shin continuously struggled with blisters. Due to this, he finished with a disappointing 6.75 ERA in 26 games. Shin picked up eight wins and nine losses with one hold.