Folk singers return with a modern take on life: Joung Tae-choon and Park Eun-ohk continue their fight against social injustice

Folk singers return with a modern take on life: Joung Tae-choon and Park Eun-ohk continue their fight against social injustice

Joung Tae-choon, right, and Park Eun-ohk talk about the details of their upcoming concerts and exhibitions at the Chungmu Art Center in central Seoul on Thursday. [KWON HYUK-JAE]

Since his debut in 1978, folk singer-songwriter Joung Tae-choon - widely known as Korea’s Bob Dylan - has written songs that have come to represent an entire generation of Koreans.

“A Village of Poets” from Joung’s eponymous debut album strikes an emotional chord with listeners. His soulful voice sings of his love for nature and poetry over a pleasant, yet melancholy, progression of guitar chords.

His raw, heartfelt lyrics instantly made him a national sensation, leading him to win to several accolades including MBC’s new artist award a year after the release of his first album.

From the late 1980s, his songs became more political and defiant. He sold the cassettes of two of his songs - “Ah, Korea...” (1990) and “1992’s Monsoon, in Jongno” (1993) - illegally on the streets knowing that they wouldn’t pass government censors at the time. He won the support of a younger, more progressive audience who empathized with his anger against oppression and social injustices.

A little over a decade ago, however, the award-winning singer left the music industry and began leading a quiet life, immersing himself in a throng of new hobbies that included calligraphy and poetry writing.

“The market stopped responding to my albums,” Joung said sternly at a press briefing in central Seoul on Thursday. The sales of his last two albums failed to get the level of attention his older works received.

“I wasn’t getting feedback from people who read into my concerns. As a public artist, I needed to be able to follow the public’s thoughts, tastes and preferences, but I was lacking that,” he said. 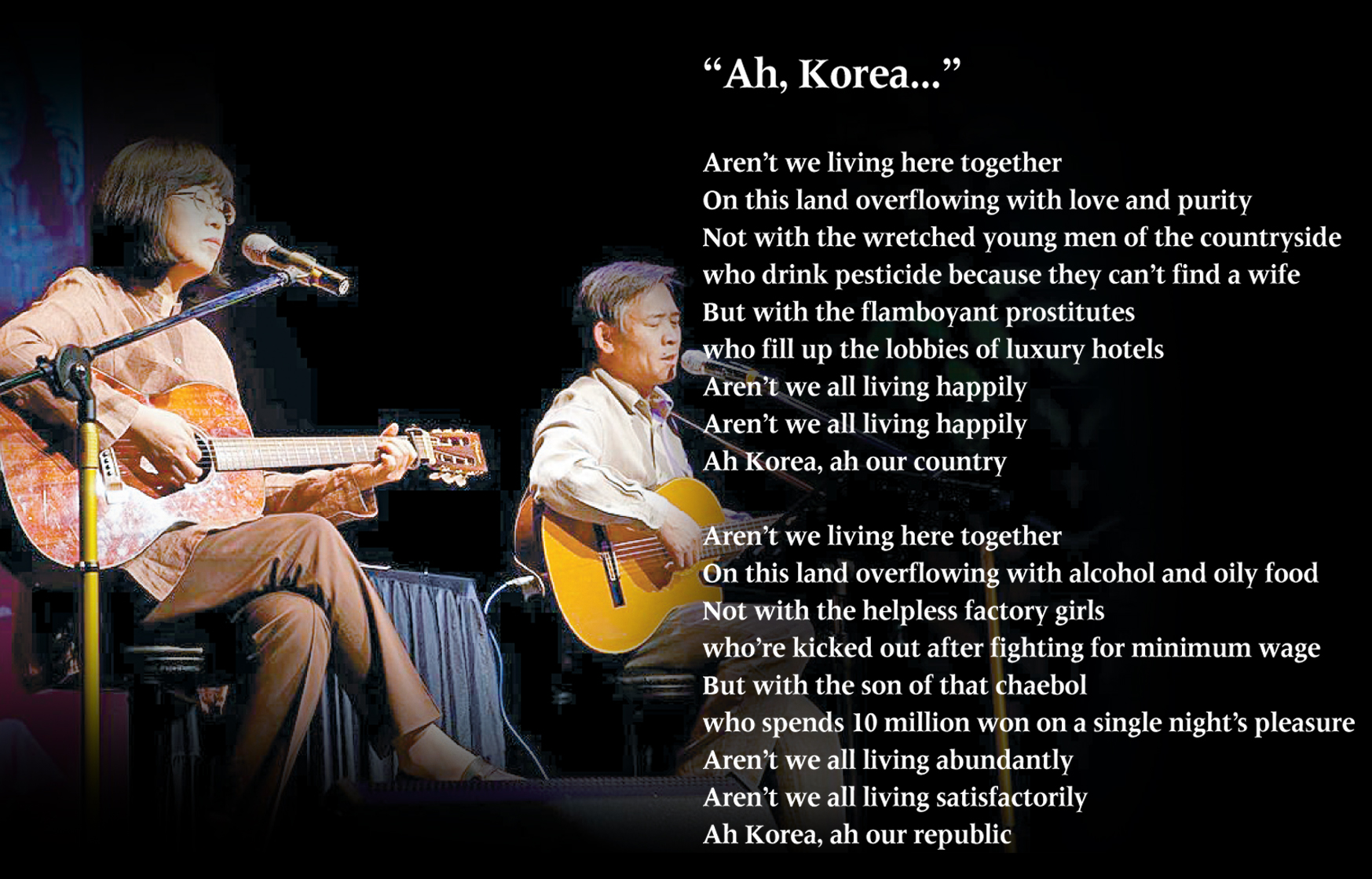 But this year, in celebration of the 40th anniversary of the musical debut of Joung and his wife and musical partner Park Eun-ohk, he’s returning with a roar.

Under an ambitious project titled “The Joung Tae-choon and Park Eun-ohk 40 Project,” the husband and wife duo are planning a nationwide concert tour that kicks off in Jeju Island in April. They are set to release a new album titled “People 2019” that includes some old songs plus a new one, publish books containing his poetry and showcase his calligraphy works at an exhibition.

In addition, there will be at least two separate research forums dedicated to studying his musical legacy and a tribute book authored by around 40 artists that analyzes Joung’s importance. A “music documentary” is also on the way, according to the singer-songwriter.

“Although I hadn’t really thought about whether it was worth reflecting on the past 40 years, this project started after some of my friends told me that we shouldn’t let the [anniversary] just pass,” said Joung.

“We prepared this project thinking about what we had pondered and expressed, and how they could impact the artists of today.”

Publisher Kim Gyu-hang, one of the organizers of the upcoming exposition, is optimistic that Joung’s music will still be relevant to a new generation.

“This might sound presumptuous, but I thought that it was time for the public to bring out Park and Joung again. I don’t only mean people born in the 1960s conjuring up memories of their old days, but also connecting Joung and Park’s music with today’s youth.”

“I was told that young people who didn’t know Joung and Park were shocked after listening to the song ‘1992’s Monsoon, in Jongno.’ Their music still resonates in the present age.”

In the words of his wife, Joung’s earlier songs were like his personal diary, while his music from the late 1980s was the diary of society. Since the early 2000s, Joung’s diary has gone from a musical canvas to paper, where he writes his thoughts on today’s society and meditates on his older lyrics.

Rage against social injustices, especially oppression and discrimination, is evident across Joung’s works.

“The song ‘Ah, Korea...’ was an important turning point for me,” he said. “Events like the people’s resistance during the Gwangju Uprising affected me. In that context, I awoke and transformed, becoming an adult, a citizen.”

On his upcoming album, Joung includes a remake of his track “People” (1993). The song, which talks about the death tolls from industrial accidents and suicides, will be updated using figures from 2017.

“In our circle, people are telling me that it’s time to raise the flag for the fourth time. Before, I’ve fought for the legalization of the Korean Teachers & Educational Workers Union, and I’ve fought against censorship and the expansion of the U.S. military base. We’re now trying to create a culture that doesn’t need to go through the mechanisms of the market.”

Joung and Park’s Seoul concert series will run from April 30 through May 7, excluding Monday, at the Sejong Art Center for the Performing Arts. Tickets start at 88,000 won ($77.50).