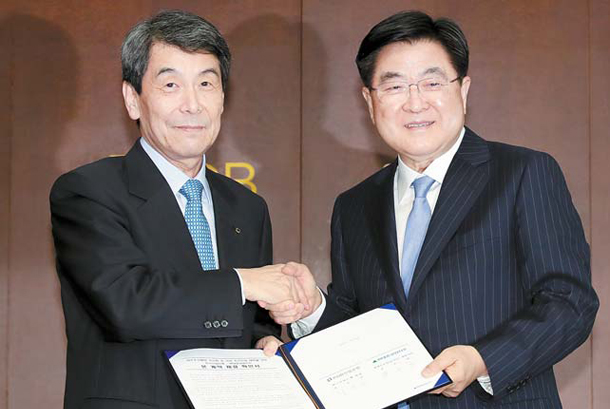 The Korea Development Bank (KDB), the main creditor of DSME, convened a board meeting to approve the sale while labor groups of each company staged protests outside of the headquarters of the bank in Yeouido, western Seoul.

DSME’s union argues that the sale was made in a back-room deal. HHI’s union maintains that the acquisition will hurt the financial status of the country’s top shipbuilder.

Lee Dong-gull, chairman of the Korea Development Bank, attempted to appease the unions at a press briefing following the agreement.

“The DSME workers will be entitled to the same benefits as HHI workers,” he said, “The acquisition could also boost the competitiveness of both companies by sharing advanced technologies and reducing costs.”

Under the agreement, Hyundai Heavy Industries Group, the holdings unit of HHI, will create a new holding company to control HHI, DSME and affiliates of DSME and HHI, which means that the deal would not translate into a full merger of the two companies. In this deal, the KDB is offering 1.5 trillion won in support and possibly another 1 trillion won if needed.

Since DSME will be run under the holding company, there will be no layoffs, the KDB has said.

Analysts predict that the Korean shipbuilder will be strong in the manufacturing of liquefied natural gas carriers, a class of ship that is likely to be in demand.

Together, the HHI Group and DSME captured 60.6 percent of LNG carrier orders last year, or 43 out of 71, according to data provided by the two groups.

With HHI announcing that the merger will allow for technology sharing and cost reductions, market analysts expect that the combined unit could gain an unrivaled dominance in the LNG segment.

Other benefit includes a reduction in costs for research and development.

The bank also suggested the sale to Samsung Heavy Industries, the country’s third largest player, but the Samsung affiliate declined the offer.