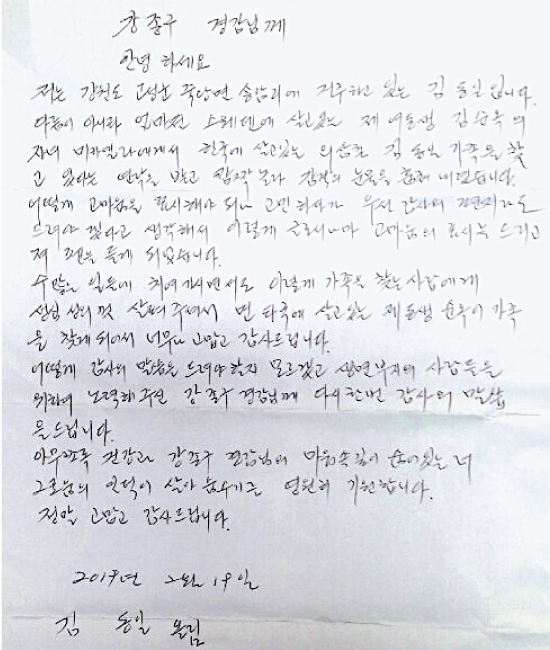 A police precinct in southern Seoul received a heartwarming letter from an elderly man in Gangwon who recently heard from his youngest sister for the first time in 30 years, thanks to the help of a local police officer.

“I don’t know how to thank you for the efforts you put into helping those you’ve never seen before,” Kim Dong-il wrote to Inspector Kang Jong-gu from Suseo Police Precinct’s women and juvenile affairs division. “Thanks to your tireless work, we were able to find my sister Soon-ok, who was living so far away in another country.”

Kim, 64, is the oldest of four children who grew up with a single mother who lost her husband early in their marriage. In 1967, when Kim was only 12, his mother — saddled with the burden of feeding five mouths on her own — made the heartbreaking decision to put up her youngest daughter for adoption abroad.

“I was too young to know the situation at the time,” Kim said. “But my mother occasionally talked about our youngest.”
The then-three-year-old youngest — Kim Soon-ok — was adopted by a family in Sweden, where she grew up for 22 years without hearing from her original family.

In 1989, the family was given a chance to see each other first the first time with the help of the adoption agency. Soon-ok and her then-fiancée flew to Korea, where she had a tearful reunion with her mother and siblings. She told them she would be getting married soon in Sweden, and her Korean family promised they would attend.

Financial difficulties prevented the promise from becoming a reality. Unable to afford plane tickets to Sweden, the family sent gifts instead.
But even those gifts didn’t make it to Sweden and were returned back to the family in Korea. Apparently, the gold jewelry among the presents could not pass Swedish customs.

Though they tried to explain the situation to Soon-ok, the family was unable to reach her after this.

“Until she passed away in 2015, our mother regretted that all contact was lost with Soon-ok due to the misunderstanding that arose with the wedding,” Dong-il said.

This February, around 30 years later, Soon-ok’s own youngest daughter, 19-year-old Micaela, contacted the Korean Embassy in Sweden saying she was looking for her mother’s family in Korea. A student in Stockholm University’s Korean Studies department, Micaela told her mother’s story to embassy workers, who then helped her get in contact with the Social Welfare Society (SWS), an organization in Korea that provides welfare service.

Through the Korean Embassy, the SWS collected all the information Soon-ok was able to remember about her family and delivered it to the police.

Yet due to the passage of time, Soon-ok could no longer clearly recall the names of her mother and brothers. The only information police had to work on was the name of a distant relative who helped Soon-ok in the past and the approximate ages of her family members.
Officer Kang, an expert in finding missing people and reuniting divided families, compiled a list of 70 people that corresponded with Soon-ok’s memories. He then narrowed down the list to 10 based on the available addresses and age levels, whom he called one by one, and finally found Dong-il.

“Unfortunately, Soon-ok’s mother had already passed away, but we were able to get her brother’s address,” Kang said. His long experience in the field proved instrumental to the reunion.

Micaela will be coming to Korea this April, and Soon-ok, too, promised to visit Korea in June to reunite with her remaining family. Dong-il’s son, Jin-ho, said he recently had a video phone call with his newfound cousin, which he said brought him joy.

“Micaela showed us the marriage invitation for [Soon-ok’s] wedding from 30 years ago, which contained all our names,” he said. “We will try to clear up any misunderstandings that we fear may have arisen when we meet in person this summer.”

Kang said he sympathized greatly while listening to the stories of families like the Kims, and also feels proud for helping them.

“We will continue to pour in all our investigative efforts in the future to help reunite the families of adoptees,” he said.