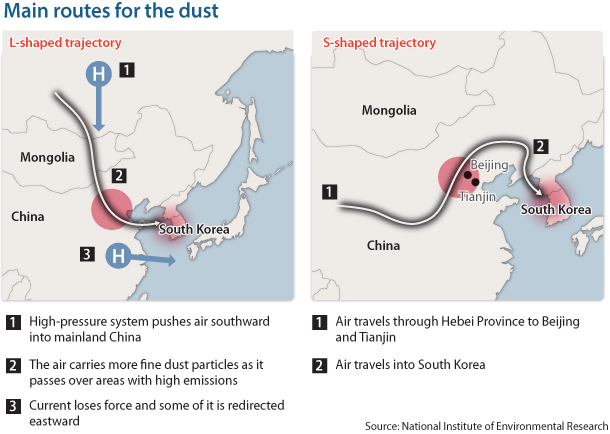 After analyzing fine dust records from around 300 severely polluted days from 2015 to 2017, the Korean Ministry of Environment concluded that the biggest contributor on those days was a combination of the international inflow of air pollutants and stagnant air.

The ministry’s think tank, the National Institute of Environmental Research (NIER), analyzed its fine dust data of 303 days from 2015 to 2017 when more than five cities in the country recorded levels of PM2.5 particles over 36 micrograms per cubic meter, which is considered unhealthy.

PM2.5 particles are particles less than 2.5 micrometers in diameter and about 30 times smaller than the width of a human hair. The World Health Organization (WHO) describes them as carcinogenic since PM2.5 particles can travel through the respiratory tract and reach the bloodstream, causing lung cancer and other lung conditions as well as heart problems and strokes. The WHO recommends daily exposure to no more than 25 micrograms of PM2.5.

“Of these, we found the combination of stagnant air and long-range transport [of pollutants] made up the majority of cases for the 303 days we analyzed,” the report said.

“As far as our findings go, it appears that there are three things combined that produce high levels of fine dust in Korea,” said Huh Kuk-young, a researcher at NIER. “High concentration of fine dust particles from China, an air current traveling long distances into South Korea and the mix of domestic and international air pollutants.”

As for the routes that the fine dust particles took into South Korea, the report said, “We found that long-range transport of PM2.5 in many cases occurred via a pathway formed in the boundary of a high-pressure system coupled with a small-scale low-pressure system or trough.”

NIER analyzed the wind currents in the East Asia region, which involves the high-pressure system above China and Mongolia that pushes the air southward.

This southbound wind current tends to lose its strength as it continues to travel, and once it reaches the land near the Yellow Sea, the winds veer off course, some traveling eastward toward South Korea.

“That’s where we see an L-shaped pathway that may carry the fine dust particles from rather highly concentrated regions of China into Korea,” the report said.

According to a map provided by the report, the current travels through the Hebei and Shandong Provinces of China, where cities like Beijing, Tianjin and Qingdao are located.

Another wind current that NIER analyzed was an S-shaped one that formed east-west across China, traveling south before rising north through the Beijing and Tianjin regions, then falling south again into South Korea.

“Biomass burning emissions in Northeast China has the potential to influence PM2.5 concentrations in South Korea in late October and early November after long-range transport via a strong northerly wind,” NIER said in its report.

The institute said that it hopes its findings will help contribute to a more accurate projection of the fine dust level in the country.

“Because there are so many factors at hand contributing to the PM2.5 concentration level in the air, including stagnant air, inflow of particles, domestic pollutants and a mix of the two, further research is needed on how the combination of these factors lead to differing levels of PM2.5,” NIER said. “Our findings and additional research in the future altogether should be able to help produce a more accurate forecast on the fine dust conditions.”

A NIER researcher added that regional cooperation would be crucial.

“Because this is a regional phenomenon, we need to be able to pool resources with China and even with North Korea to have more accurate projections on fine dust,” a NIER researcher said.

Although Korea has seen rising levels of fine dust for several years, this year and 2018 have been the worst. The daily average level of PM2.5 particles broke the record in Seoul on Tuesday, hitting 135 micrograms, the highest since 2015, when data was first recorded.