Law student is a class to himself

Law student is a class to himself 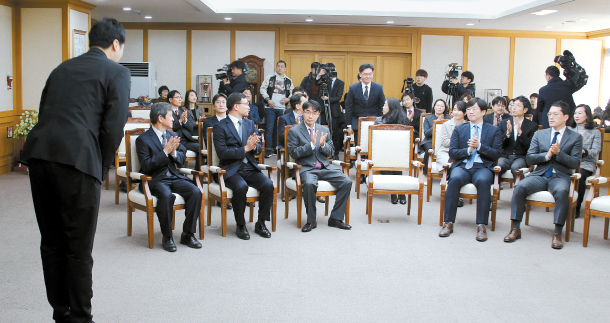 Cho Woo-sang, left, introduces himself to professors at the Judicial Research and Training Institute on Monday at his welcoming ceremony. [YONHAP]

Cho Woo-sang, 33, is perhaps the most privileged trainee lawyer in the country’s history. He will receive private tutoring by elite professors at the Judicial Research and Training Institute for two years.

Cho, who passed the bar exam in November 2015, joined the institute on Monday. He was the only student at the welcoming ceremony — because he is the final student for the institution.

Cho’s special status is the outcome of two special systems in Korea: mandatory military service and a state-run bar examination that has been replaced by a U.S.-style law school program.

In Korea, the legal profession is a sure-fire way to climb society’s ladder, and the annual state-run bar exam, which started in 1963, produced over 20,000 lawyers. 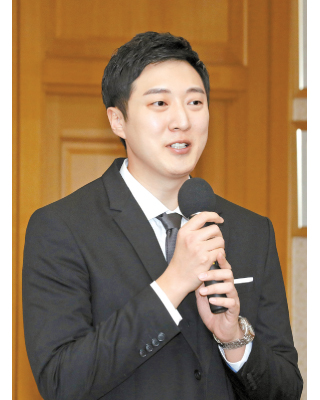 But in 2009, the system was replaced with U.S.-style, three-year professional law degree programs at 25 universities. The bar exam itself was discontinued on Dec. 31, 2017.

While the notoriously competitive state-run exam produced hundreds of legal professionals a year, it was considered an antiquated system that forced individuals to study on their own, sometimes for decades. The law school model was considered more modern and also intended to increase the number of lawyers, thus providing more legal service to the public.

Under the old system, a person who managed to pass the exam went on to two years of training at the Judicial Research and Training Institute. After those two years, the newly minted lawyer could find a job with a law firm as a prosecutor or military lawyer, or even as a judge,

Cho passed the exam in 2015, in the last couple of years of the old system. But he was 30 and could not postpone his military service any longer.

After he completed his duty, he became the one and only student in the final class at the institute on Monday. (Last year’s entering class was the last full class. They graduate in 2020.)

His late enlistment was due to an unusual past. A native of Seoul, Cho went to Japan in 2005 to study law at Keio University.

He continued his studies at the University of Tokyo’s law school and passed the Japanese bar exam in 2011. He did not stop there and challenged himself to the notoriously competitive Korean exam, passing in 2015.

“You only live once, so I want to do all the great things, even if they are tough,” Cho told the JoongAng Ilbo.

“I was told that some people have Korean and U.S. licences to practice law in both countries, but no one has ever passed both the Korean and Japanese bars,” he said.

“When I was studying in Japan, I saw Korean bar exam questions and thought it was doable. I wanted to test my ability to find my maximum capacity.”

Cho said international lawyers who take cases in Korea and Japan and prosecutors who handle global cases inspire him. But he has not decided on his own career path yet.

His solitary student life at the Judicial Research and Training Institute won’t be easy. Schedules are tightly planned for trainees — even solo ones — and he will have to wake up every day at 7 a.m. Classes are scheduled back to back from 10 a.m. until 5:20 p.m. and they are to start immediately after the entrance ceremony Monday.

As of now, the institute has 33 professors, and six to eight will personally tutor Cho. Instead of holding classes for Cho alone, some classes will take place jointly with upperclassmen who joined the program last year. Video lectures will also be given.

One-on-one intensive classes by a mentor professor will take place every week. In his second year, Cho will receive field training as a judge, prosecutor or lawyer.

“People might think that it was easy for me to pass the bar exam, but actually, I failed several times during my five to six years of test preparation,” he said. Cho admits he was not a top student in his high school years.

He said his performance depends on studying hard, so he spent 10 hours a day to pass the bar. “At one point, my room felt like a prison,” he said.

“I felt that my life wouldn’t begin unless I pass the bar exam and become a law professional,” he said. “I was running so crazy and I could not deviate from the goal. I passed the bar exam in Japan after one try, but repeatedly failed the Korean one.

“Thinking back on it, I realized that I was lazy because of my success in the Japanese bar exam,” he said. “You can only pass when you have nowhere to run away. Law school and the civil servants exam are the same. If you prepare for it without determination, you will never pass. You have to know clearly why you are studying to continue studying.”

Cho said it is not necessarily wonderful to be the last student at the Judicial Research and Training Institute. In the legal community, there is a saying that everything goes back to the relationships you form at the institute, but he will have no fellow alums after he graduates.
“If you keep thinking about what you don’t have, it’s stressful,” he said. “I’d rather think about how to be different from other people.”