Scientist tells women to dig in

Scientist tells women to dig in 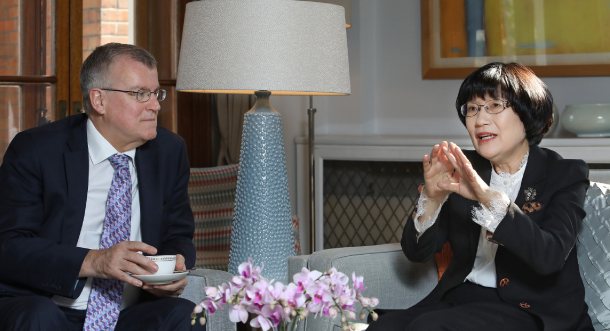 Chung Hee-sun, right, former head of the National Forensic Service and the first woman to head the organization, and British Ambassador to Korea Simon Smith, discuss female empowerment in Korea and Britain at the diplomatic residence in central Seoul on International Women’s Day, which fell on last Thursday. [PARK SANG-MOON]

It’s not what you think about when it comes to gender equality - it’s what you don’t think about, according to Chung Hee-sun, former head of South Korea’s National Forensic Service (NFS) and the first woman to head the organization.

“For instance, when pharmaceutical companies develop a new medicine, they develop it while taking into account its effects on a male patient, not a female patient,” said Chung. “In other words, they are developing a medicine based on the considerations of its effect on a regular male’s height, weight and other characteristics. They’re not thinking about women. We’re trying to change that way of thinking in the field of science.”

Chung spoke to the Korea JoongAng Daily on Thursday at the British ambassador’s residence in central Seoul on International Women’s Day, which falls on March 8.

Chung began her job at the NFS in 1978, when, she said, only two or three other employees at the agency were women. Over three decades, she became the first woman to head the organization in 2010.

During her career, Chung had an opportunity to study in the United Kingdom for a year and she took the chance. In 1990, she took up a postdoctoral fellowship in neuropharmacology and forensic science at King’s College in London through the British government’s Chevening Scholarships program.

“Dr. Chung has achieved something quite rare, as a woman entering an institute that was overwhelmingly populated by men at the time, and as someone who has made a name for herself in the field,” said Simon Smith, the British ambassador to Korea.

Her path was not without its own challenges.

“I failed to get promoted twice at the NFS,” Chung said. “I was disappointed and thought about resigning, but I liked my job too much.”

Chung’s past is not unique.

While women majoring in STEM (science, technology, engineering and mathematics) outnumber men in graduate schools in developed countries, the gender gap widens significantly when the actual employment rate of women in STEM is considered. According to a recent OECD report, women make up only some 25 percent of all STEM workers in developed countries.

Breaking down the statistics by positions and ranks, the number of women in STEM-related work becomes smaller in higher-ranking positions. Part of the problem may be unconscious assumptions.

“When we look at our systems for promoting and developing people, many organizations do this: Here are the skills we are looking for, here are the qualities, here are how we want people to behave in a certain situation, here is how we want people to have impact and have influence, but [we need to ask,] ‘Are we defining those from a kind of traditional or stereotypical male perspective?’” Ambassador Smith said.

Removing biases from institutions, therefore, may be a solution, he added.

In celebration of what it means to be a woman on the occasion of International Women’s Day, Chung said she would like to tell all working women to stick it out at their workplaces.

“I tell the ladies I meet, stay longer where you are - that is the best thing,” she said. “The way women are treated at workplaces in Korea have changed from when I began working 40 years ago, but many are still awaiting changes that have not come yet. I tell them, stay longer and the chance will come.”

Earlier in January, she was selected by the British government as one of 35 exceptional global leaders who have been educated in the United Kingdom through its Chevening Scholarships program, whom it calls “changemakers.” She was also awarded the Honorary Commander of the Order of the British Empire by Queen Elizabeth II in 2014 for advancing the bilateral relations in science and education. Chung, who was nominated as the next president of the Korea Federation of Women’s Science and Technology Associations, will begin her new job in 2020.