Nu’est with 5 again to drop single

Nu’est with 5 again to drop single 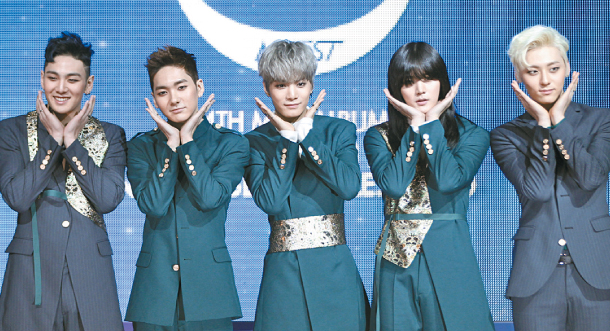 Boy band Nu’est once again has its full complement of five members, and will release a new song next week.

According to the band’s agency, Pledis Entertainment, on Sunday, the song is set to be released on March 15 at 6 p.m. and will celebrate the seventh anniversary of the band’s debut.

The agency also unveiled a teaser image of the upcoming song through its various social media accounts, featuring the words “Fill It Up In My Stead” on a notebook, hinting at the song’s title.

After member Minhyun was chosen as a finalist on the second season of Mnet’s audition program “Produce 101” in 2017 and became a member of boy band Wanna One, the other four members formed the group Nu’est W - the W standing for “waiting.” Minhyun is now back with his original group after Wanna One disbanded in December last year.

Last week, the agency also announced that the band will hold a concert series from April 12 to 14 at Olympic Park, southern Seoul.