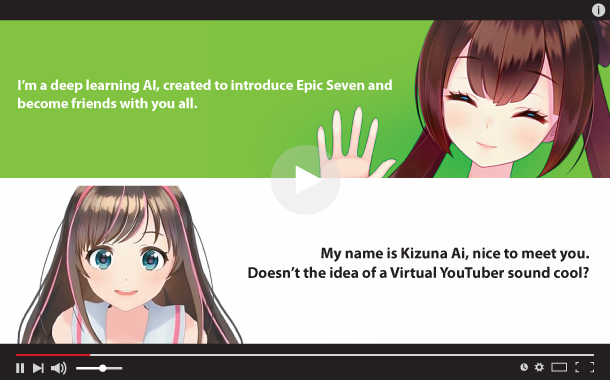 The most popular VTuber is the Japanese Kizuna Ai, above. Korea’s most popular character is SE:A, top. [SCREEN CAPTURE]

Born on July 7, 2017, and coming in at 160 centimeters (5 feet 3 inches) tall and 16.3 megabytes heavy... megabytes? This profile of a Korean YouTuber named SE:A is a bit different than what most people usually see. And rightly so, because she’s not a human - she’s a VTuber, a Virtual YouTuber.

The ever-growing versatility of content on YouTube has led audiences to believe that we’ve seen almost everything at this point. But the idea of a VTuber is a surprise to those who have never come across characters who have presented themselves as existing solely in the digital world.

The advent of the first VTuber three years ago signaled the dawning of a new chapter in the world of creative content, and the concept is starting to spill over into digital realms that go beyond just simple leisure, opening up the possibility of an era where a human will no longer be needed behind the camera. From a girl group made up of video game characters that was launched last year, to China’s Xinhua New Agency unveiling the world’s first female artificial intelligence (AI) news anchor on Feb. 20, the experiments are not only pushing the boundaries of content creation, but posing fundamental questions about how content will be produced and consumed in the future.

The definition of a VTuber is quite straightforward: YouTubers taking on the identity of virtual characters, such as characters from games and cartoons, who have broken away from the world in which they originated and have assumed a new role. This is certainly the case for the first and most popular name in the short history of VTubers: Kizuna Ai.

Ai started her YouTube channel on Dec. 1, 2016, and has since accumulated 2,462,000 subscribers, with the number growing everyday. Ai was the world’s first VTuber by an anonymous YouTuber.

“My name is Kizuna Ai, nice to meet you,” says Ai in her introductory video. “You there, who think I am a little different - you have a sharp eye. I am … two-dimensional! Or three-dimensional? Anyway, let’s just say that I’m virtual. Doesn’t the idea of a Virtual YouTuber sound cool? I’m different, and so I’m interesting. I would like to get to know you more and become friends, humans!”

Her videos are not much different than the videos produced by most other YouTubers. During the 500 videos uploaded to her channel, she sometimes plays games, tries quizzes, eats food, puts on makeup, tries cooking, teaches Japanese to her subscribers and so on. She sometimes even broadcasts live to communicate with her fans, taking questions from comments and answering them in person. There are times when she tries things that can only be done because she is a digital character, like taking a bath in a bottle of soda.

A list of active VTubers and their rankings based on how many followers they have is available on a Japanese website named User Local, which provides an updated number of YouTube subscribers for 2,000 VTubers - most of whom are Japanese - and their information, such as which agency they belong to. Ai is a part of a VTuber agency called upd8, founded by activ8, the company who is said to be behind Ai.

Other VTubers of upd8 include YuNi (250,000 subscribers), Oda Nobuhime (151,000 subscribers) and Yamikumo Kerin (143,000 subscribers). Companies such as The Moon Studio, Entum and Live also own popular VTuber channels that are listed on the top 10 VTubers. Some 6,000 VTubers are active in Japan.

And although the number of subscribers to her channel isn’t as big as her Japanese competitors, SE:A also regularly updates new videos on her YouTube channel, which has accumulated 56,000 subscribers since her first video in July 2017.

Unlike Ai, SE:A is a character developed by Korean game company Smilegate. She was launched to promote the company’s mobile game Epic Seven, and remains the first and most popular Korean VTuber.

“Virtual YouTubers in other countries are going beyond the simple broadcasting content and going live to communicate with the fans,” said Chae Dong-soo, a director at Smilegate Megaport. “They are evolving in various ways, such as putting on offline concerts. We will be trying new things that have not been seen in Korea with SE:A.”

Despite their efforts, the reason why the number of subscribers to the most popular Japanese and Korean channel is so visibly different, according to Wi Jong-hyun, a professor at the business school at Chung-Ang University, comes from the fact that people in Japan are more open and comfortable with the idea of animated characters in their lives than people in Korea.

“We have a tendency to prefer real people over fictional, animated characters, which is the opposite in Japan. For example the character Hatsune Miku [a Vocaloid] is so popular in Japan that it even tours the country, while we still consider animation culture very minor in Korea. Smilegate was smart to choose their game as the source, because then [SE:A] can spread among gamers and increase her popularity to a different audience.”

YouTuber Dan Jinul, who runs a channel that introduces animated characters, agrees. According to him, there needs to be more of this kind of content in Korea for it to succeed. But right now, the lack of quantity in VTubers may actually work against the development of the field in the long term.

“SE:A was a good attempt, but I don’t think that it will get the reaction it hopes for,” said Jinul. “I personally welcomed it, because it’s the advent of a new kind of content. But to those who are not familiar with it, I think that it might even make people think worse about [animation and games]. It may even have [raised] the barrier for newcomers … If someone would like to start a VTuber channel, I think it might be a good idea to target audiences outside of Korea.” 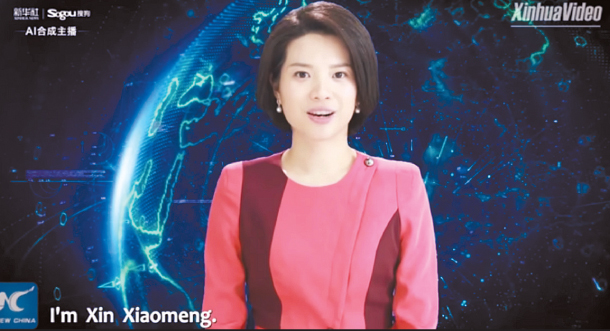 The idea of a virtual human identity is not a new one. In 1996, a cybersinger name Kyoko Date made her debut in Japan, opening a new world of possibilities in the music industry. Korea’s very own virtual singer Adam made his debut in 1998, and gained quite a large fandom, although short-lived.

In February, China’s Xinhua News Agency released a video of the “world’s first female AI news anchor” named Xin Xiaomeng, who was modeled after an existing news anchor at the company.

Xin made her debut report on the China’s national legislature convening its annual session on March 3. Clad in a pink outfit, audiences would have never guessed that she’s not human had they not been told in advance. Her natural intonation and facial features seem almost human, showing subtle movements that human anchors would also have shown on screen.

Although Xin is not a two-dimensional character, her non-human presence assuming a human role on screen poses a similar question about how video content will be produced in the future, according to Kwak Keum-joo, a professor of psychology at Seoul National University. Virtual characters will be able to do so much more compared to humans, who are bound by time, location, money and so many other restrictions, but the issue of responsibility also comes into question.

“Virtual characters will be able to do whatever we wish and even expand our creative possibilities because they’ll be able to do things that we can’t,” said Kwak. “But because they’re fictional characters, we can’t hold them liable for their actions. For instance, if a character does something immoral or illegal, then it’s difficult to hold them responsible for it, because holding them to human standards will be a fuzzy area. Both outcomes are possible depending on which direction we go in.”

Realistically, it may take some time for any character to be held responsible, according to Yoo Seung-chul, a professor from the School of Communication & Media at Ewha Womans University, because of what is known as the “uncanny valley” and the human desire for the real thing. Uncanny valley is a term used to explain the phenomenon of humans preferring something that’s similar to our appearance - like stuffed dolls or animated characters - but becoming repulsed by it if it becomes too similar.

“It has to stay within a very fine line where it’s not too different from us, but not too similar either,” said Yoo. “And even if it becomes too natural for us to tell whether it’s real or not, the human mind will immediately reject it once it finds out that it’s not real. For example, if you find out that what you thought was an original painting by Leonardo da Vinci was actually just a well-made digital print, then you may want to throw it away. With technological advances, similar content will become more common, but it’s unlikely that they will become mainstream.”