Pets pay the price when it’s dangerous outside

Pets pay the price when it’s dangerous outside 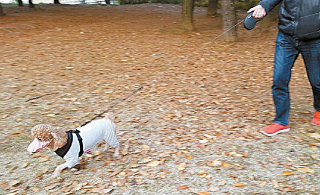 A puppy is walked wearing a mask, although vets question whether the masks are actually effective. [DEARDOG]

Cho Yeon-jung has two pet dogs. Last week, when the fine dust levels got particularly high, Cho wasn’t the only one struggling. Her dogs, used to going on regular walks, also struggle with their sudden confinement, spending hours scratching at the door desperate to go outside and play.

“The vet told me not to let my puppies go out for a walk when the find dust level is high,” said Cho. “I can’t decide whether it is better to put a mask on my dogs and take them out or not.”

Fine dust is as much, if not more, of an issue for pets as it is for people. Experts, including vets and dog trainers, say that animals are more susceptible to fine dust than people, so ideally pets should be allowed out the house as little as possible. Exercising indoors as much as possible is preferable, they say.

“Animals inhale much more air than humans compared to their weight, but their organs are smaller,” said Na Eung-sik, director of animal hospital The Grace. “Although animals are exposed to fine dust for the same amount of time as humans, they can absorb much more.”

When humans breathe in 5 to 10 milliliters of air, dogs and cats breathe in 10 to 15 milliliters. Pets are also at risk of breathing in heavy particles that tend to stick close to, or on, the ground. As pets, definitely dogs, tend to sniff the ground as they walk, they breathe in large amounts of these heavier metallic particles.

Pollutants also stick to animals’ fur and hair and can be consumed later as the pet grooms itself. A buildup of particles trapped in the fur can also cause skin problems.

Recently masks for pets have started to pop up online and in pet stores, but there are serious doubts over whether they actually do any good.

“It is not verified whether the masks are effective in blocking fine dust, so we recommend not using it,” said Na.

In addition, if a dog is not used to wearing a muzzle, a mask is just going to make it stressed and confused, which can lead to heavier breathing.

“Instead of taking them out for a walk, spread small snacks or food on the floor or put some snacks in an open plastic bottle,” recommends dog trainer Cho Jae-ho.

Letting a dog sniff around the house hunting for snacks can be almost as stimulating as taking them out for a walk. Other forms of indoor exercise, like playing with a plastic bottle or toys, can also help burn off exercise. Drinking lots of water helps animals pass pollutants out of their body.

“If pets eat dog food that has vitamins or antioxidants in it, their blood can be purified,” said Cho.

Kim Hyun-kwan, who lives in Yeonhui-dong, western Seoul, usually walks his beloved dogs Simba and Lala by the Han River every day. Recently, he has had to cut down the walks to once or twice a week.

“Taking a walk with my dogs was one of the biggest joys in my life after I retired, but it feels like due to the fine dust, a precious part of my daily life has disappeared.”