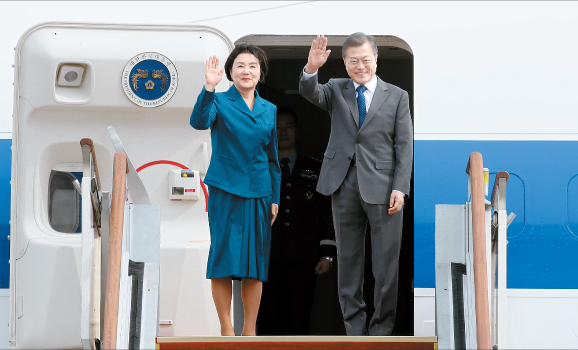 President Moon Jae-in and first lady Kim Jung-sook wave at Seoul Air Base in Seongnam, Gyeonggi, on Sunday before departing for Brunei, the first leg of a three-nation Asean trip that will also take them to Malaysia and Cambodia. [YONHAP]

South Korean President Moon Jae-in kicked off a three-leg Southeast Asian tour on Sunday in a bid to improve ties and ramp up support for dialogue between the United States and North Korea.

Through Saturday, Moon will visit Brunei, Malaysia and Cambodia in that order in his first overseas trip in 2019. Before Moon departed Seoul Air Base in Seongnam, Gyeonggi, at around 2:30 p.m. on Sunday, a high-level Blue House official said the president was expected to stress that the latest U.S.-North Korea summit, which ended early with no agreement reached, was a “productive” meeting after all, and that it was crucial that both countries said they were willing to continue talking in the future.

Moon will also discuss South Korea’s role in North Korea’s denuclearization with the three Southeast Asian nations, noting the fact that he has earned the trust of both North Korean leader Kim Jong-un and U.S. President Donald Trump, the Blue House official continued.

Moon is slated to start his official schedule today by attending a welcoming ceremony hosted by Brunei’s Sultan Hassanal Bolkiah in Bandar Seri Begawan, the capital. It’s the first time in six years that a South Korean president is visiting Brunei after former President Park Geun-hye went there in 2013 to attend an Association of Southeast Asia Nations (Asean) summit.

Kim Hyun-chong, second deputy chief of the Blue House National Security Office, told reporters last Friday during a briefing that Brunei was the country coordinator for Asean-Korea dialogue, adding both countries hoped to strengthen ties in new fields during Moon’s visit. Kim pointed out that the South could help Brunei with the establishment of a patent system.

From Tuesday through Thursday, Moon will be in Malaysia to attend a welcoming ceremony hosted by the king, Sultan Abdullah Sultan Ahmad Shah, after which Moon is expected to hold a summit with Malaysia’s prime minister, Mahathir Mohamad. The last time a Blue House chief visited Malaysia was in 2015 when former President Park went there for another Asean summit.

The Blue House said Moon was expected to discuss artificial intelligence (AI), as well as information and communications technology during his Malaysian visit, and ways to boost cooperation in the fourth industrial revolution.

In his last stop, Moon will visit Cambodia from Thursday to Saturday to meet with King Norodom Sihamoni and hold a summit with Hun Sen, Cambodia’s prime minister. More than 200 Korean companies have entered the Cambodian market and bilateral relations rely heavily on Korea’s development assistance.

Kim, the second deputy chief of the Blue House National Security Office, said the three countries Moon will visit this week were important partners in South Korea’s New Southern Policy, and that Moon was planning to ask for support in successfully hosting a Korea-Asean special summit and a Korea-Mekong summit later this year.

This year’s Korea-Asean special summit will be the third of its kind, after the first such special summit was held in 2009 on Jeju Island, followed by another in Busan in 2014. Moon is also expected to play host at the inaugural Korea-Mekong summit, which will involve leaders of countries located along the world’s 12th longest river, including Laos, Vietnam, Thailand, Myanmar and Cambodia.

The New Southern Policy refers to Moon’s ambitious vision to expand Korea’s influence in Southeast Asia with the promise of treating members of Asean as diplomatic and economic partners as important to Korea as the United States, China, Japan and Russia.