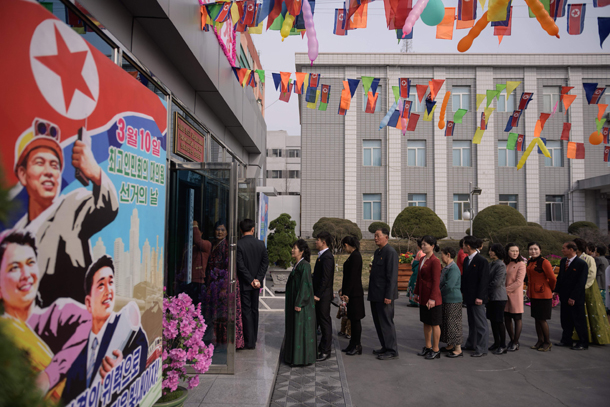 North Koreans line up at a polling station at the 3.26 Pyongyang Cable Factory to elect roughly 700 members to its rubber-stamp national legislature Sunday. [AFP/YONHAP]

The communist state will elect new deputies for the 14th Supreme People’s Assembly, its rubber-stamp legislature. Polls are held every five years. The deputies will replace those picked in the first parliamentary elections under the current leader in March 2014.

North Korean voters, aged 17 and older, were scheduled to cast their ballots between 9 a.m. and 6 p.m.

As of noon, 56.76 percent of all registered voters had cast their ballots, according to the North’s official Korean Central News Agency (KCNA).

“All the electors are participating as one in the election for the sake of the prosperity of the socialist country and development of the people’s power with their great pride and honor of being members of the great Kim Il Sung’s nation and Kim Jong-il’s Korea,” the KCNA said in an English-language article.

The article referred to the current leader’s late grandfather and father.

The candidates include workers, farmers, intellectuals and soldiers who are striving to uphold Kim’s ideology and leadership, and backing his push for national development, according to the North’s state media. There is only a single candidate registered for each constituency.

Observers said that Pyongyang might use the political event to further reinforce national cohesion and have its people coalesce behind its ruler, particularly after last month’s breakup of the Vietnam summit between Kim and U.S. President Donald Trump.

The second Trump-Kim summit on Feb. 27 to 28 ended without a deal as they played hardball over the scope of Washington’s sanctions relief and Pyongyang’s denuclearization. But both sides appear willing to keep their dialogue alive.

The Rodong Sinmun, the daily of the North’s ruling Workers’ Party, carried an editorial that stressed the election will manifest people’s “fixed will to firmly trust and uphold” leader Kim.

“Every ballot cast for the candidates for deputies reflects the loyalty to firmly defend the unique idea of the great leaders on building people’s power and their exploits,” the editorial said.

“Each approval ballot is an expression of the fixed will to further cement the people’s power and dynamically step up the building of a powerful socialist country,” it added.

The voting is largely considered a formality. The official voter turnout was tallied at 99.97 percent for the last election, with 100 percent voting for the approved candidates.

The results of the 2014 elections were announced two days after the voting day.