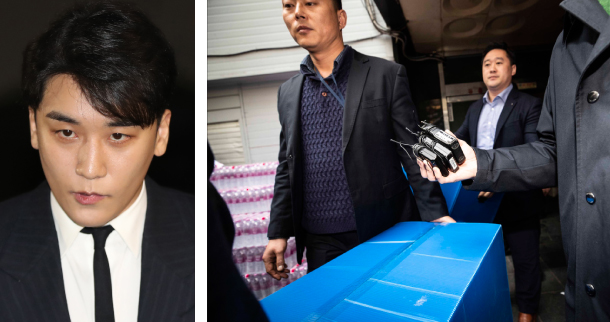 The investigation into the Big Bang member expanded after an anonymous source submitted KakaoTalk chats to the government’s Anti-Corruption and Civil Rights Commission on Feb. 22.

Around 11 a.m. Sunday, 20 police officers were sent to Arena to find evidence on the allegations against Seungri.

There is also an ongoing investigation into Arena’s owner, a man surnamed Kang, on allegations of tax evasion and bribery. Five criminal investigators were sent to the National Tax Service’s Seoul Regional Office on Friday to procure Arena’s tax affairs, according to officials Sunday. Kang’s funds have been investigated since last year after the Seoul Regional Office accused him of evading some 15 billion won ($13 million) in taxes through a shell company.

Kang, who has 16 adult entertainment businesses in Gangnam, is suspected of having given bribes to government officials in the area. The police have obtained a two-volume ledger with records of payments to Gangnam District Office officials. They suspect that there are more of these illegal exchanges, and will continue to examine the ledger.

This investigation is also linked to a neighboring club in Gangnam District, the Burning Sun, which was once managed by Seungri. The police are investigating the club for alleged sales of drugs, sexual assaults and bribing of police officers. Seungri denied the allegations and underwent a drug test last month.

His agency, YG Entertainment, announced on Friday that he will join the military on March 25.