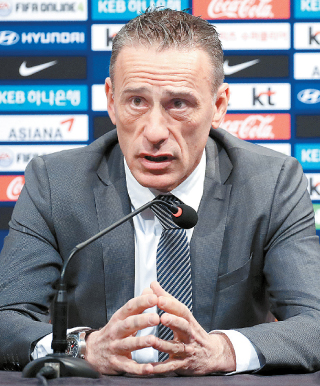 Of the 27 players, Bento announced some new faces - Lee Kang-in of Valencia CF, Paik Seung-ho of Girona FC and Kwon Chang-hoon of Dijon FCO. It is the first time that Lee and Paik have been called up to the senior national team, and Lee is now the seventh youngest player to ever get the invite, at 18 years and 20 days.

Although Lee hasn’t seen much action with Valencia’s top team, he made history in October 2018, when he took the pitch in a European league match. By playing in the Copa del Ray’s round of 32 match against CD Ebro, he became the youngest Korean player to make his debut in a European league match and also became the first Asian football player to play for Valencia’s top division team.

Lee made history again in January, when he made his league debut. At the time, Lee became the youngest foreign player to play in the league in the club’s 100-year history, at 17 years and 327 days.

With the Korean national team, Lee has played seven matches for the U-20 team and scored four goals. If Lee gets on the pitch, he will become the third youngest player to ever play for the national team.

Paik has also never played for the senior national team but he is expected to make an impression on the team. Along with Lee Seung-woo of Hellas Verona, Paik was Korea’s key player at the 2017 FIFA U-20 World Cup. Following the U-20 World Cup, Paik also left Barcelona’s youth academy and made his first-team debut with Girona in January.

“Both players have enough talent to be selected,” Bento said at a press conference. “I wanted to see how they perform with the national team.”

The last time Kwon joined the national team was in May 2018, when he was added to Korea’s preliminary 28-man squad for the 2018 FIFA World Cup. However, Kwon missed his chance to compete for Korea at the World Cup after he was injured during his club’s final game of the 2017-18 season.

“I’ve seen Kwon’s performance in previous matches,” Bento said. “He has good technique and can play well with the ball.”

Rather than seeking experience, Bento added young players onto the roster for the upcoming friendlies, hoping to replace the veterans - Ki Sung-yueng of Newcastle and Koo Ja-cheol of Augsburg - in the long term, as they both announced their retirement after the 2019 Asian Football Confederation (AFC) Asian Cup.

“We’re in the process of preparing for a new start,” Bento said. “With our backbone set for the national team, I wanted to test new players who can add more things to the team. I wanted to see as many players as possible before we enter the preliminary round of the Asian qualification for the 2022 FIFA World Cup.”

The 27 players will start training on Monday. Korea is scheduled to play against Bolivia at Munsu Football Stadium in Ulsan on March 22 and against Colombia at Seoul World Cup Stadium on March 26.