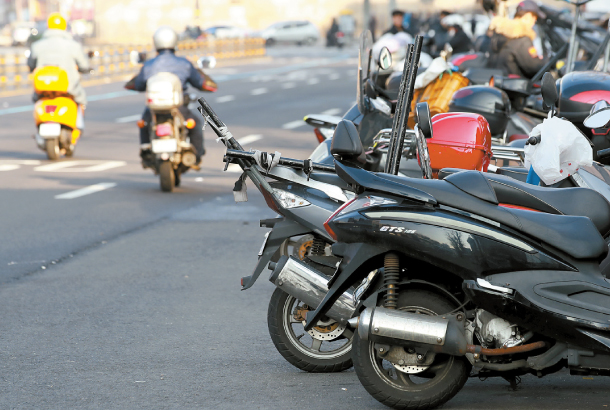 Kim, who has owned a pizza shop in Incheon since last May, is finding that delivery is a problem.

He considered buying a motorcycle for the delivery of orders, which accounts for 80 percent of his business. Then he found that a single 125cc scooter costs 4 million won ($3,570), about 20 percent of his total initial start-up costs.

Then he thought about renting. But he discovered that it would cost him 250,000 won a month, plus insurance.

The insurance alone is more than his rent.

“The comprehensive insurance costs over 8 million won, so I could not even attempt to rent a bike,” he added.

That left Kim with only one choice. He has to use a delivery service. While the delivery charge differs according to distance, on average it is 4,000 won. 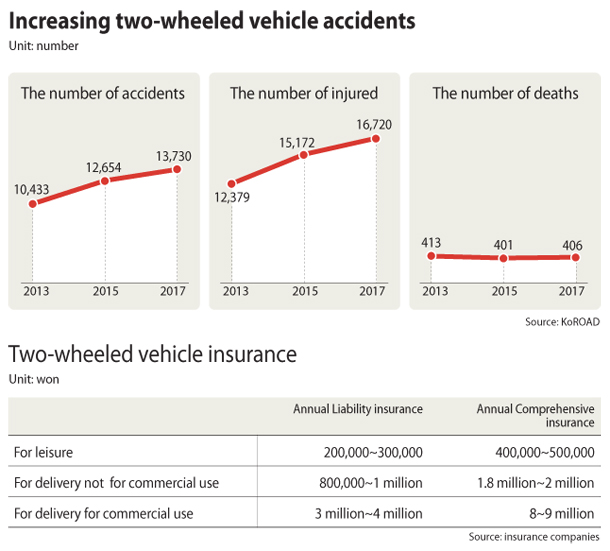 “When a pizza set costs slightly more than 10,000 won, the delivery charge is about 40 percent of that,” said Kim.

“If this continues, eventually food costs will increase, and it will be the consumers who become the victims.”

Han, an owner of a meat restaurant in Gwangjin District, eastern Seoul, recently faced unexpected expenses due to a motorcycle accident involving one of his part-time delivery workers. As an individual businessman, he purchased the bike in his own name and only bought the liability insurance to keep costs down.

“I only bought liability insurance, which only compensates for damaged property and injured people, but I had to pay the hospital bills for the injured worker and the repair costs for the bike, which totaled millions of won,” he said. “I had asked the insurance company if I could join the comprehensive insurance program, but the company declined, saying that the loss ratio is high, so I think not being able to join the comprehensive insurance caused this disastrous result.”

Delivery is convenient and much used these days. Almost any small item can be ordered by phone and brought by motorcycle or by any other two-wheeled vehicle. But the rate of accidents is high, making the insurance expensive.

This is the dark side of delivery service.

The higher insurance costs are feeding into delivery costs, and ultimately into the price of product. Last year, the cost of delivery was 3,000 won per 1.5 kilometers (0.93 miles) on average in Seoul. This year, the price jumped to 4,000 won.

Delivery is a 15 trillion won market in Korea, and the number of delivery freelancers is estimated to be about 200,000.

As delivery increases, so, too, have the accidents.

Over the past five years, car accidents peaked at 232,035 in 2015, and have decreased since then. In that period, accidents involving two-wheeled vehicles have risen 30 percent.

Motorcycles are in general underinsured. According to the Ministry of Land, Infrastructure and Transport, in 2017, only 123,000 bikes among the 2.16 million motorcycles registered, or just 5.7 percent, had comprehensive insurance.

“Those who deliver are mostly young, and momentary carelessness can result in a deadly accident. So the insurance is inevitably expensive. The price is determined by the frequency of accidents,” said a source from the insurance industry who asked for anonymity.

The delivery industry is trying to make the work safer.

“In Europe, as delivery services become more widespread, the insurance problem for delivery by two-wheeled vehicles is becoming a social issue,” said Ryu Jin, the communications head at the app’s operator Woowa Brothers. “In order to solve the insurance problem of two-wheeled vehicles for delivery, industries needing delivery services, insurance companies and the government should put their heads together and discuss solutions by suggesting creative alternatives,” he added.