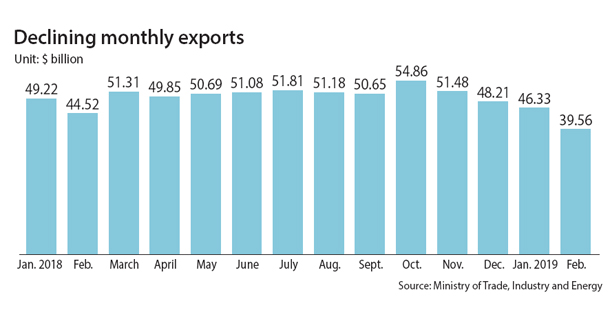 The recent economic downturn has some economists advocating a rate cut and calling for a shift in the economy away from export-led growth and more towards consumption-led growth.

Hyundai Research Institute projects especially weak economic indicators in the first quarter. In light of the gloomy outlook, the think tank is suggesting the central bank change its stance from one of gradual rate normalization.

“In terms of monetary policy, [the Bank of Korea] needs to consider a pre-emptive rate cut based on the state of domestic demand,” the institute wrote in a report released on Friday.

“The reasons for a rate hike have been significantly weakened, given the possibility of the U.S. Fed easing the pace of rate increases and the slower growth rate of household debt levels,” the report said.

The Bank of Korea (BOK) has kept its benchmark interest rate unchanged at 1.75 percent since it lifted the rate in November last year.

BOK Gov. Lee Ju-yeol cited external uncertainties, such as the U.S.-China trade row, as the factors affecting the decision in February while brushing off the idea that the central bank should consider lowering the interest rate.

The research institute noted that Korea is beset by unfavorable domestic and external conditions, ranging from sluggish exports, a tepid jobs market and weak investment to the ongoing trade dispute between the United States and China, geopolitical and economic uncertainties surrounding Brexit and North Korea.

Korea’s exports, which hit an all-time annual peak of $600 billion last year, fell for the third consecutive month in February, according to the Ministry of Trade, Industry and Energy.

January’s current account surplus reached $2.77 billion, up 4.92 percent from $2.64 billion a year earlier, according to preliminary data released by the central bank.

But the latest reading represents the smallest monthly surplus since April last year.

Customs data showed on Monday that the country’s exports fell 19.1 percent in the first 10 days of March from a year earlier due to reduced shipments of semiconductors. Exports registered $10.9 billion in the March 1-10 period, compared with $13.5 billion in the same period last year, according to the Korea Customs Service.

The Korea Development Institute (KDI), a state-run think tank, echoed Hyundai’s view on Monday in its report. It said that the country is in an “economic downturn,” phrasing that the Finance Ministry and the central bank have been avoiding.

“Korea’s economy is indicating a downturn, affected by declining investment and shrinking exports,” the KDI said, “The economy is slowing on the production side, led by the mining and construction sectors.”

The Korea Institute for Industrial Economics & Trade, a research center under the Trade Ministry, called on the government to ditch the notion of export-driven economy and shift towards consumption-driven growth.

The institute said that the country’s export growth remained below economic growth rate between 2014 and 2017, which makes the export-oriented view rather obsolete.

Instead, domestic consumption should take the lead in boosting the economy, the institute said.

But it acknowledged that it would take time to achieve the ideal of a consumption-driven economy, and during the time, the government may need to take a more active role.

“At a time when exports are not enough to drive the economy, the government needs to utilize fiscal policy,” the report said.