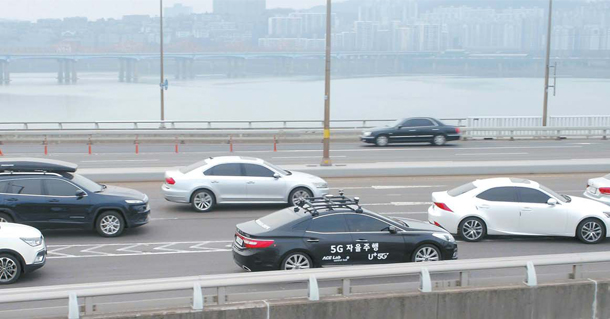 A 5G-connected self-driving car, in black, center, jointly developed by LG U+ and Hanyang University’s Automotive Control and Electronics Laboratory drives across a Seoul bridge Monday. [LG U+]

After turning on its blinkers, the A1 moved smoothly into the line of vehicles running at about 60 kilometers per hour. The car was also able to recognize the 80 kilometer-per-hour speed limit and adjust accordingly. The car passed through tollgates and over speed bumps with ease, and it kept a safe distance with cars in front.

When the car was alerted of a small accident near its original destination, it immediately changed its route. LG U+ said such fast decision-making is aided by the 5G network’s low latency.

While the driver drove the car hands and feet free, another demonstrator seated in the back put on a virtual reality headset to enjoy VR videos. LG U+ said it will release 5G-based media content that people can enjoy inside cars, as the commercialization of self-driving cars would mean more spare time inside vehicles.

The demonstration was live-streamed using the 5G network to reporters gathered at Hanyang University’s campus in Seoul. 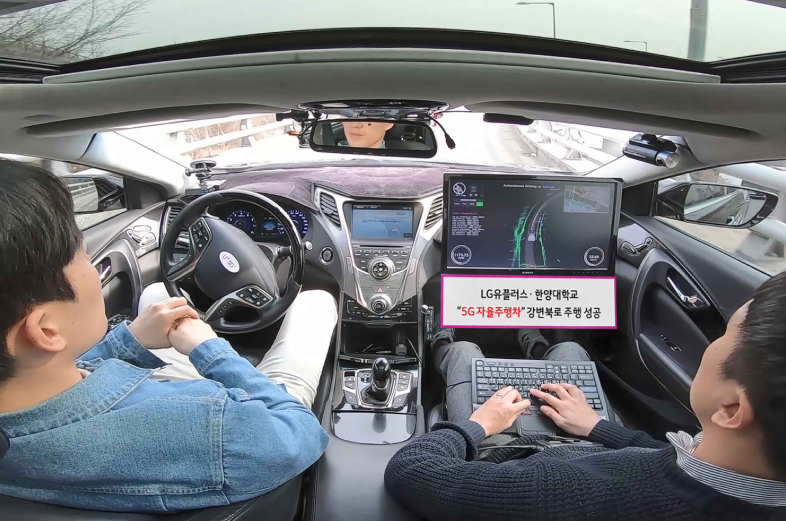 Inside the A1 self-driving car co-developed by LG U+ and Hanyang University on Monday. The monitor in passenger seat shows what the car is seeing through its sensors. [LG U+]

While rivals SK Telecom and KT have been aggressively promoting their 5G-based autonomous car technology, through 5G buses or 5G-based car infotainment systems, the demonstration was the first for LG U+. The company said that unlike its competitors - which demonstrated their 5G technologies in controlled situations - LG’s demonstration is the first to test a self-driving car in real traffic.

The mobile carrier and the university’s Automotive Control and Electronics Laboratory (ACE Lab) has been working on the self-driving car since last year to make it more responsive to changing traffic situations using the next-generation 5G network. The two parties touted the car as having Level 4 self-driving capabilities, as defined by the Society of Automotive Engineers, meaning the car can drive on its own without human intervention.

“5G-applied self-driving cars can be the answer to heavy traffic congestion and traffic accidents,” said Sunwoo Myoung-ho, the professor leading the ACE Lab. “Our ultimate goal is to make a society with zero traffic accidents by developing smarter cars.”

According to Sunwoo, there are roughly one billion registered cars around the world, and every year about 1.3 million people die in car accidents in which the driver is negligent.

“There will be a time when fully self-driving cars that operate without intervention become commonplace,” he added, though he said top level, or Level 5, autonomous cars are not likely to be commercialized before 2025.

The professor said that while Korea’s level of autonomous driving technology is on par with that being tested by the world’s leading tech and auto companies in terms of software, the country has yet to secure key technologies necessary to build sensors akin to eyes for self-driving cars. LiDar (light detecting and ranging) sensor and radar sensors are essential to help self-driving cars maneuver.

He added that while collecting big data is important to improve existing self-driving software in the long-term, domestic regulations make it difficult to conduct large-scale self-driving trials on real roads.