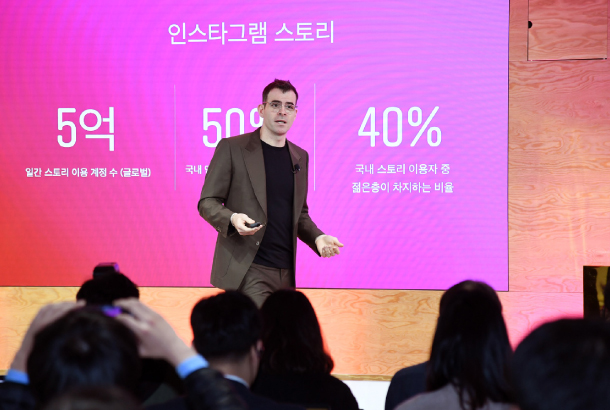 Adam Mosseri, head of Instagram, talks about the social media’s business in Korea at a press conference in Gangnam District, southern Seoul, on Monday. [INSTAGRAM]

Korea’s piece of the Instagram universe is thriving thanks to K-pop and Esports, said the social media company’s CEO on Monday.

Having spent more than 10 years at Facebook, Adam Mosseri was named head of Instagram last October. Korea is one of the first countries he is visiting on a tour of overseas offices.

“One of the reasons I’m here in Korea is that I’m excited about the opportunity we have as Instagram as a global platform to help the rest of the world know about or discover things about Korean culture,” he said during a press conference in Gangnam District, southern Seoul, on Monday.

Mosseri added that the company was devising ways to connect Korean users to overseas content, but also to help Korea’s cultural exports to foreign viewers. He said K-pop has been one of the most buzzed-about music genres on Instagram since 2015.

“K-pop is not only Korean but a worldwide phenomenon at this point,” said Mosseri. “It’s huge in Indonesia and is growing in the States.”

More than one million users have uploaded posts, liked or wrote comments on Esports-related content in the last three months, Mosseri said. People are following team accounts but also those of individual players, which shows how Instagram is being used as a medium in which people want to see an authentic version of people working in the industry rather than their refined image.

Another field Mosseri said was trending in Korea was studygram, for which a corresponding Korean word is hashtagged on more than 22,000 posts. Studygram posts show videos or tips about studying and are mainly used by students or adults preparing for tests like the civil servant entrance exam.

Instagram has monthly users of more than one billion worldwide but does not disclose exact figures for Korea. A company spokesman said that Korea was one of the fastest changing markets in terms of trends. Mosseri was visiting to understand the market better, the spokesman said. On Sunday Mosseri made visits to the SBS’s “Inkigayo” studio and the League of Legends live competition.

Among ongoing services, Mosseri stressed the importance the company is putting on the story function, which allows users to share videos or photos for 24 hours instead of uploading them on a permanent feed. In December, the number of stories on Korean Instagram accounts rose 50 percent year on year. The service was particularly popular among high school and college students, who account for 40 percent of users of the story service.

One member of the local media asked Mosseri about Instagram’s “cannibalization” of Facebook. Mosseri, a Facebook alumnus himself, said that he believes having multiple products will help the company react to different needs, as consumers on both platforms have different demands and advertisers can tackle them both.

A spokesman for Facebook Korea added that whereas it was true Instagram was growing at a much higher speed, Facebook was not retreating in Korea, suggesting local teenagers’ heavy use of Facebook’s messenger app as proof.