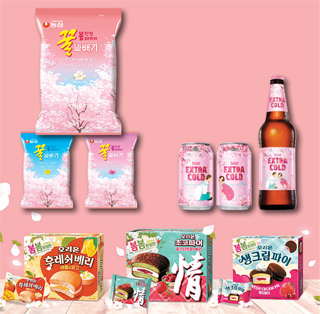 With spring just around the corner, food and beverage companies are busily looking for ways to sell the season.

They are introducing limited-edition promotions to catch consumers’ attention, but their strategies are diverse. Some went straight strawberry, a spring classic, while others opted for the unconventional.

Lotte Confectionery is going traditional. Pinkish hues dominate the packaging of its limited spring offerings. It recently introduced strawberry-flavored Mongshell cream cake, and its Choco Pie mixes strawberry jam with a cheese-flavored base.

Lotte reintroduced a strawberry spinoff from its popular Custard lineup and mixed strawberry and banana flavors for its Glutinous Rice Cake Pies.

“It has become a must [for confectionery firms] to bring out limited spring-themed editions that exude a spring ambience and are different from existing products both in terms of taste and packaging,” said a spokesperson from Orion.

Binggrae diverged from the common strawberry theme and launched a new type of milk that mixes peach and lychee flavors. The company chose living coral, which the Pantone Color Institute named as the color of the year, as the color for its new drink. The latest offering is the company’s third attempt to market milk with unprecedented flavors after mulberry and tangerine.

“Though the likes and dislikes toward [the peach and lychee milk] are quite divided, it seems to be receiving attention due to people’s curiosity about its unique taste and because it’s a limited edition,” said a spokesperson from the company.

Nongshim is focused on the packaging of its honey twist snack. Against the backdrop of blooming cherry blossoms, the company added spring flowers - like forsythia and azalea - in the middle of the packaging with supportive remarks like “I hope you are overflowing with the joy of love.”

Hite Jinro will release spring-themed beers next week that are packaged with the images of falling cherry blossoms and a couple looking affectionately at each other against a pink backdrop. These limited drinks will be launched in two categories: a 500-milliliter (16.9-ounce) bottle and 355-milliliter and 500-milliliter cans.

Other snacks filling up the store shelves with limited spring promotions include Haitai’s Honey Butter Chips with a cherry blossom makeover and Crown’s Heim Blossom, a spinoff of its signature white and milk chocolate Heim snacks.

Despite efforts by food and beverage companies to refresh their signature snacks and drinks by giving them a makeover in the new season, the response is mixed.

“I see seasonal food and drinks every spring, but I just don’t think they will be as good as the originals,” said a 26-year-old office worker surnamed Park. “I won’t try the spring editions just because it’s a seasonal product, unless someone recommends it.”