Chun’s day in court in Gwangju

Chun’s day in court in Gwangju 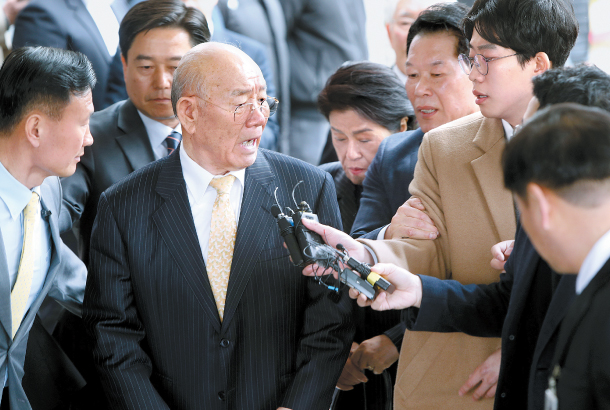 Former President Chun Doo Hwan arrives at the Gwangju District Court on Monday to attend a libel trial over controversial memoirs in which he allegedly defamed a priest’s account of the 1980 pro-democracy uprising. [JANG JUNG-PIL]

Chun Doo Hwan, Korea’s authoritarian leader in the 1980s, entered a court Monday in the southwestern city of Gwangju, where pro-democracy protesters were massacred by his military, as a criminal defendant in a libel trial.

Chun, 88, was accused of defaming a late Catholic priest by denying his account of the military’s bloody crackdown on democracy protesters in Gwangju in 1980.

The trial began in courtroom 201 of the Gwangju District Court. Chun was charged with libeling the late Father Cho Pius, a key witness of the Gwangju uprising of May 18 to 27, 1980, which called for democracy and an end to Chun’s junta.

Cho, a religious leader and democracy activist who died in 2016, testified that the military had opened fire on protesters from helicopters during the crackdown.

Chun published a memoir in April 2017 largely defending his authoritarian presidency amidst the Moon Jae-in administration’s campaign to re-evaluate a series of controversial events from the country’s modern history.

“Father Cho Pius is a shameless liar who does not deserve the title of a religious priest,” Chun wrote on page 484 of the memoir. Chun also called the late father “Satan wearing a mask.”

Although the Gwangju District Court wanted to start a trial in May 2018, Chun repeatedly delayed his attendance citing poor health, including Alzheimer’s disease.

On Jan. 7, the court issued a subpoena to begin the trial, and Chun finally left his home in Seoul Monday morning to head to Gwangju.

Judge Jang Dong-hyeok presided over the trial and the first hearing ended after 75 minutes. Chun was accompanied by his wife Lee Soon-ja and lawyer Chung Joo-kyo.

Last week, he asked that his wife be allowed to sit next to him because of his fragile mental and physical condition. The court agreed.

According to Article 244-5 of the Criminal Procedure Act, which governs special rules for those who need special protection, a criminal suspect is allowed to have the company of a person with whom they have a reliable relationship “if the suspect lacks the ability to discern right from wrong or make and communicate a decision due to a physical disability or mental disorder” or “if it is necessary to facilitate psychological stability and smooth communications, considering the age, gender, nationality, or any other aspect of the suspect.”

The prosecution argued Monday that Chun had defamed the late Father Cho by publishing false information in his memoir. It said that data from the National Archives and the outcome of a Defense Ministry special investigation as well as records of relevant probes, trials and witness testimonies comprise objective evidence that the military opened fire from helicopters during the Gwangju uprising.

Chun’s lawyer, Chung, denied the charge. He said there was not enough proof that helicopter shootings took place at 2 p.m. on May 21, 1980, in Gwangju as argued by the late Father Cho.

He said there was no machine gun firing from a military helicopter during the Gwangju uprising. Even if there was, the indictment cannot be upheld unless the helicopter shooting took place at the exact moment claimed by the late Cho, he argued.

“Chun’s memoir was based on his own memory, records from state institutions and the [1995] prosecution’s investigation,” Chung said, arguing that his client did not defame the late father by publicizing false information with a malicious intent.

Although the hearing was public, only those who secured tickets in advance were allowed in.

Only 103 were given out, including tickets for the late Father Cho’s relatives and members of Gwangju Democratization Movement associations. No photos were allowed inside the courtroom.

The key to the trial was whether Chun had known that it was false to say there was no helicopter shooting when he denied the late Father Cho’s testimony and whether Chun had intentions to defame Cho.

The prosecution said various records substantiate that the military opened fire on protesters from helicopters. In February 2018, a special investigation committee of the Ministry of National Defense announced the outcome of a probe that looked into the massacre of pro-democracy protesters by the Martial Law Command.

It confirmed for the first time that the military fired on demonstrators from helicopters.

The Army mobilized 40 helicopters to Gwangju during the 10-day demonstration, and attack helicopters and utility helicopters were used to open fire on protesters on multiple occasions on May 21 and 27, the committee said.

It also confirmed that the Martial Law Command made multiple verbal and written orders to the helicopters to conduct strafing runs starting from May 21.

Monday was the first time in 23 years that Chun has entered a courtroom for a criminal trial, since he was prosecuted in 1996 on charges of conspiracy and insurrection to hold him accountable for the Dec. 12, 1979, military coup and the deadly crackdown on the 1980 Gwangju uprising.

Although he was initially convicted and sentenced to death, the punishment was later reduced to life imprisonment in appeals trials. He began serving jail time in April 1997, but his sentence was commuted by President Kim Young-sam in December 1997 on the advice of incoming President Kim Dae-jung, an iconic democracy advocate.

The next hearing on Chun’s libel case will take place on April 8.