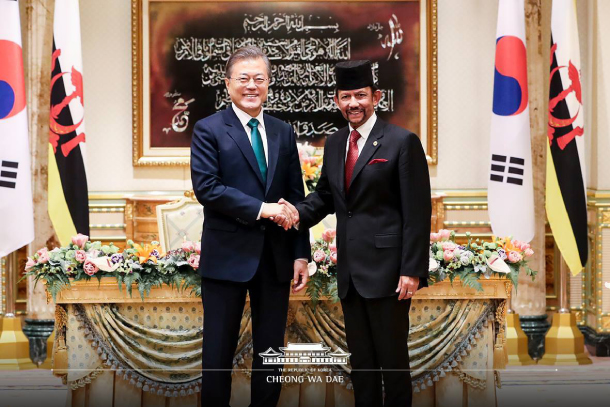 South Korean President Moon Jae-in, left, and Sultan Hassanal Bolkiah of Brunei shake hands at a signing ceremony for new agreements on bilateral cooperation that followed their bilateral summit at the official residence of the Bruneian monarch, Istana Nurul Iman, on Monday. [YONHAP]

In a bilateral summit held in the Bruneian capital, President Moon Jae-in and Sultan Hassanal Bolkiah noted the countries have steadily developed their friendly relations in the infrastructure and energy sectors over the past 35 years since they established diplomatic ties.

“In addition, the two leaders agreed to continue their support so the countries’ cooperation in building an LNG value chain spanning from gas mine development and transportation to sales will further expand,” Moon’s presidential office Blue House said in a press release.

The South Korean leader arrived here Sunday on a three-day state visit, becoming the first South Korean president to do so in 19 years. South Korea imports over 1 million tons of LNG from Brunei annually.

Moon and Bolkiah also agreed to work together to promote bilateral cooperation in areas of intellectual property and science and technology while also expanding the countries’ joint efforts to create new growth engines, the press release said.

To help expand the number of visitors between the two countries, the leaders also agreed to seek an increase in the number of direct flights.

The number is already set to increase to four per week from the current three next month, according to the Blue House. Moon’s trip here came as part of a three-nation tour that will later take him to Malaysia and Cambodia, which, along with Brunei, are members of the 10-nation Association of Southeast Asian Nations (Asean).

Brunei is currently serving as a coordinator for a special summit between Seoul and Asean to be held later in the year in South Korea.

“The two leaders agreed the special South Korea-Asean summit will be an important opportunity to review the South Korea-Asean relations over the past 30 years and seek ways to develop their relations in the future, and agreed to work closely together for the success of the summit,” it added.

Moon also asked for Brunei’s continued support for his country’s efforts to establish permanent peace on the Korean Peninsula.

Bilateral trade between South Korea and Asean reached a record high of $160 billion last year. South Korea seeks to expand the amount to $200 billion by 2020 under its New Southern Policy.

Moon has also stressed the importance of Asean countries in ridding North Korea of its nuclear ambitions, noting that all 10 members of Asean have diplomatic relations with Pyongyang.