For better or worse, Kang Jung-ho is back

For better or worse, Kang Jung-ho is back

Kang Jung-ho of the Pittsburgh Pirates looks set to start the 2019 season strong, hitting four home runs in spring training practice games despite not having played for almost two full seasons due to issues off the field. 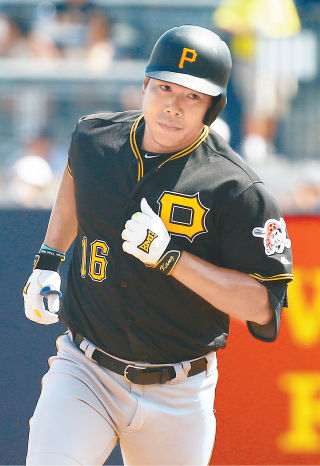 With another home run, Kang now has a batting average of .200 with six runs and four RBIs in eight spring training games. Interestingly, Kang has only had four hits and every single one was a home run.

With regard to performance, Kang looks as though he will make a successful return to the field, although his comeback remains controversial.

Kang, who has played for the Pirates since 2015, missed the last two seasons due to U.S. visa issues stemming from a drunk driving charge in Korea. Despite the legal issues, the Pittsburgh club kept him on the books and he will return to the field this year. Not all Pirates’ fans are happy to have him back.

On Saturday, the Pittsburgh Post-Gazette released details of a poll that asked fans’ opinion of Kang’s return.

Yet the story did acknowledge that Kang’s recent run of homers has improved his standing in the eyes of Pirates’ fans.

In the KBO, Kang has won four Golden Glove Awards and was selected as an All-Star five times, as well as topping the league’s slugging percentage. He was also a vital member on the Korean national baseball team, where he helped Korea win gold at the 2010 and 2014 Asian Games.

Following a dominant KBO career, Kang made his major league debut with the Pirates in 2015, signing a four-year contract for $11 million with an option for a fifth year. As the Pirates’ third baseman and shortstop, Kang recorded a .274 batting average with 204 hits, 36 home runs and 120 RBIs. During his major league rookie season, Kang finished third in the National League’s Rookie of the Year vote and quickly became a Pirates starting player.

Kang was first accused of sexually assaulting a 23-year-old woman in July 2016. Since the accuser chose not to cooperate with the police investigation, no charges were made against Kang.

Then, in December 2016, Kang was arrested for leaving the scene of a DUI hit-and-run accident in Seoul. This was Kang’s third DUI, following incidents in August 2009 and May 2011.

Although Kang avoided jail, the incident was serious enough for it to affect his career as it prevented him from earning his U.S. work permit. Due to this, Kang had to take almost two full seasons off in the majors.

As he was unable to make his way to the United States, Kang played in the Dominican Winter League but was quickly released.

It wasn’t until April 2018 that Kang was finally granted a work permit in the United States. He started playing in the minor league in June, and in 16 games he recorded an impressive .310 batting average. But that didn’t last too long, as he underwent a wrist surgery in August.

Despite the surgery, Kang returned to the Pirates on Sept. 28 last year, just in time for the last three games of the regular season. In three games, Kang had a batting average of .333.

Once the season ended, rather than extending Kang’s option of another year, the Pirates released him and then re-signed him on a one-year contract at $3 million in November 2018.