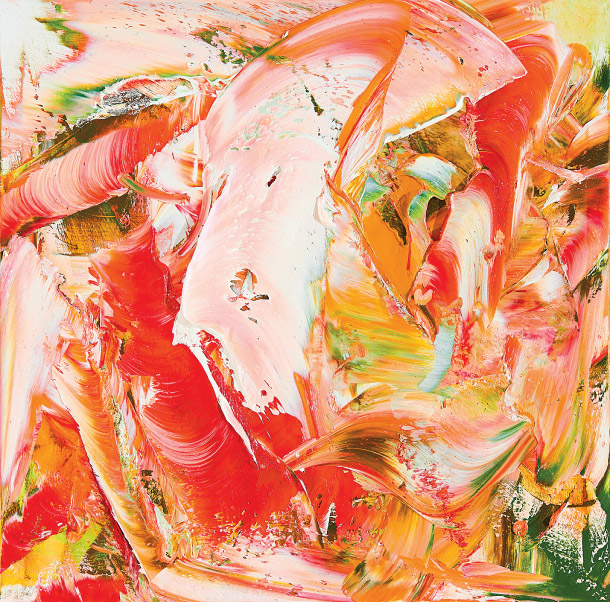 One of Je Yeoran’s abstract paintings in the “Usquam Nusquam” series. It is part of her solo show that runs through April 10. [313 ART PROJECT]

Given that American abstract expressionist artists in the mid-20th century are often considered to be the pioneers of combining gesture with abstraction, Korean artist Je Yeoran, 59, who started her solo show on Friday, might be regarded as a successor to their tradition.

Each of 26 abstract paintings now on view in the exhibition at 313 Art Project in Seongbuk District, central Seoul, demonstrate her vigorous action of painting across the canvas. They are part of her iconic series titled “Usquam Nusquam [Anywhere Nowhere].”

Yet what is expressed in Je’s paintings is quite different from what is found in work by New York abstract expressionist painters. Mark Rothko repeatedly said he was interested in expressing “tragedy, ecstasy, doom and so on.” And Robert Motherwell’s “Elegy to the Spanish Republic” series - which is coincidentally also on view in Seoul, at Barakat Contemporary near the Blue House, until May 12 - proves the abstract expressionists’ main concern was the tragedy of life and death.

On the other hand, what leads Je to paint is “something that drives you to life or some feeling of experiencing life,” she said. She explained it is not a conventional thing associated with life, such as vivacity or joy. “When you feel life, sometimes it could be even a grotesque or uncanny feeling,” she added. 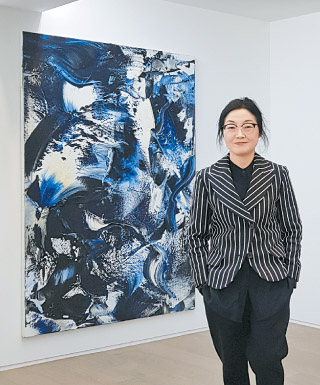 Artist Je Yeoran stands at 313 Art Project, a gallery in central Seoul, during the opening of her solo show. [MOON SO-YOUNG]

Instead of a traditional paintbrush, Je uses a squeegee. Paints of various colors have heavy textures and, sometimes, the paint is lifted up above the canvas, resembling Hokusai’s “Great Wave.”

“Each [piece] of the ‘Usquam Nusquam’ series is an accumulation of bodily gestures driven by Je’s internal impulses,” the gallery explained. “As a result, the canvas is imbued with a sense of dynamic energy, mirroring the artist’s state of mind at constant progress. For Je, the act of painting is similar to the process of unraveling and interweaving the emotional threads of her mind, encompassing the memories of quotidian scenes such as the seasonal change and weather or the joy and sorrow of the mind.”

The artist recommends viewers look at her paintings both from a distance and up close, and from every angle. “You will continue to see new forms appear and disappear,” she said.

The exhibition runs through April 10. Admission is free. For details, visit http://313artproject.com