We need to work together

We need to work together

Dong Jong-in
The author is a professor of environmental engineering at University of Seoul and co-president of Environmental Justice.

Citizens across Korea had to endure an unprecedented streak of pollution with little relief for over a week. Despite spring’s arrival, people remained indoors whenever they could. The time has come to coolly assess why fine dust levels have reached such disastrous heights, what we have done wrong and what options we have left.

Korea drew up an air environment preservation act in the 1990s and implemented a special air control law for the capital region in 2005. A set of new measures have been announced every year since 2016 to specifically address the suffocating fine dust. A special law to reduce ultra-fine dust also went into effect last month. Yet the problem continues to worsen.

The first blame goes to China. Clouds of pollutants are behind the temporary increases in high-density fine dust. But domestic factors also play a part in our poor air conditions. The Chinese Foreign Ministry is not entirely wrong to claim that fine dust pollution is Korea’s internal problem.

Experts in both Korea and China agree that pollutants from Hebei and Shandong Provinces in China, where factories and people are concentrated, fly southbound and hurt air conditions on Korea’s west coast and capital regions. Through heavy investments from 2013 to 2017, the annual average of pollution from ultra-fine dust — or PM2.5 — was brought down to 50 from 90 micrograms per cubic meter in Beijing. The number averaged 23 micrograms per cubic meter in Seoul last year. During the last five years, Korea’s pollution level has not diminished. Chinese authorities could ask what endeavors Korea has made over the last decade other than blaming China.

Korea did come up with measures. Emission levels were capped on large industrial and commercial emitters, and aged diesel vehicles had to be fitted with filters. But the emission cap is imposed mostly on burning facilities and makes exceptions for facilities and vehicles around Seoul and the nearby cities of Incheon and Gyeonggi Province. Eco-friendly cars also make up a tiny portion of vehicles on the road. 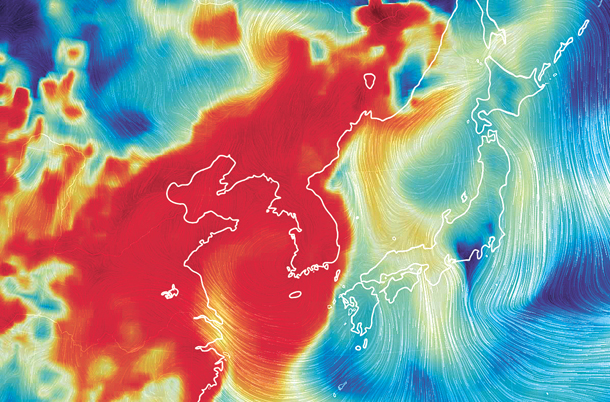 A visualized image of the pollution from fine dust over the Korean Peninsula on March 5 shows it mostly originates with China. [YONHAP]

Actions against ultra-fine dust were drawn up only in 2015 and strengthened in March last year. As the ultra-thin particles — about 30 times smaller than the width of a human hair — are so small, they must be addressed differently than the larger PM10 particles. Authorities must draw up a list of the gaseous, volatile organic carbon and nanometer pollutants.

According to overseas findings, half of the ultra-fine dust comes from unidentified pollutants. The latest measures therefore would be limited in combating pollution. Ideas the likes of artificial rain and walls painted with dust-absorbing materials have not been scientifically proven. Inventive ideas should be welcomed, but authorities must strive to find more workable, convincing and fundamental solutions.

A new framework should be in place to ease the scare. The phenomenon, where highly dense clouds of pollutants stay for a lengthy period around the West Sea, partly owes to the climate conditions around the eastern coast of China and western coast of Korea. Common actions should be introduced to address the air pollution around the coastal regions. A regional environmental cooperative network — involving the two Koreas, China, Taiwan, Mongolia and Japan — should be launched for regular governmental and non-governmental level discussions, exchanges and consensus-building structure.

Since factors causing fine dust can differ by region, each local government must set up their own air control task force. The central government must back them with money and other resources. Various civilian-led campaigns should be encouraged. A supervisory system must be enforced to keep a regular watch on administrative control.

Declarative action on fine dust will not help. What must follow are effective and fundamental actions based on thorough and scientific data to draw support from both civilians and experts.