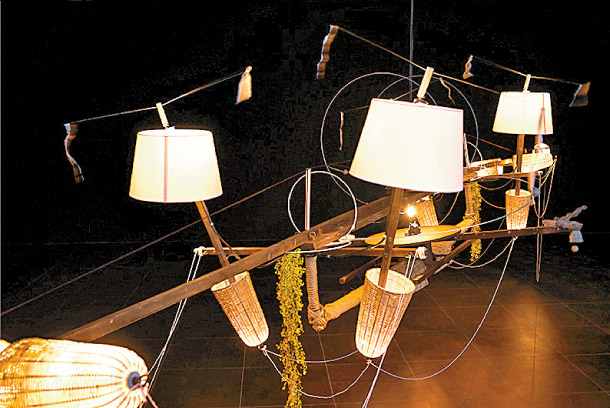 Through March 27
: Yang Jung Uk is a young artist known for his kinetic sculptures and installations created with mixed media including everyday objects to tell the stories of trifling events in daily life or of human relations and feelings about these in very symbolic and ambiguous ways. “In his first solo exhibition at the gallery, Yang presents installations that depict the ordinary, yet subtle moments that people face in relationships,” the gallery said.

Among the works on display, the “Group Photo” series is “about the awkward moments, feelings and other emotions of when I took a group photo to commemorate a specific day or event,” the artist told the press last month. The small sculpture series, “Friends Who No Longer Meet,” depicts “the friends who are fun from a distance but are exhausting to be a close friend with,” the artist explained.

The large-scale installation made of lamps and other things, titled “Scenery of Dialogue #2,” portrays the interaction and mediation between the artist and his wife and the interior design of their new home.

Admission is free. The gallery is closed on Monday. Go to Anguk Station, Line No. 3, exit 1, and walk for 10 minutes.

Through March 30: Famous for the cover of the “Sex and the City” books, featuring colorful dresses against a black and white background, and other fashion illustrations in a similar style, the artist Megan Hess is behind many fashion illustrations, such as collaborations with luxury fashion houses Christian Dior, Chanel, Louis Vuitton, Fendi, Cartier, Prada, Versace, Tiffany & Co. and Givenchy, and also 100 illustrations of celebrities including Michelle Obama and Beyonce.

Through March 31: Bek Hyunjin, 47, is a versatile artist. He is better known to the public as an actor, singer and songwriter who has fronted the avant-garde indie band Uhuhboo Project since 1994. Yet Bek is also a visual artist who was one of the four finalists for the prestigious Korea Artist Prize in 2017.

The exhibition features 65 paintings on 93-by 93-centimeter (36.6-by-36.6-inch) canvases that cover parts of the gallery’s high walls like big tiles. Some of them are abstract paintings, while others are doodle-like paintings with figurative forms, such as a dog or a human face. The paintings are interpreted as concerning the minor images and events we encounter every day and the fragments of thoughts and emotions in the stream of our daily lives, which are like a quiet, monotonous song.

Bek also shows a combination of his art through the performance “Musical: Permanent Spring,” which takes place every Wednesday and Friday until the exhibition wraps at the end of March. In the performance, he paints a mural while monotonously humming a work song.

Through April 7: This exhibition features more than 120 paintings that were created for the 2017 Oscar-nominated art film “Loving Vincent.” Animated entirely with oil paintings that pay homage to the beloved, yet tortured Vincent van Gogh and his distinct painting style, the biopic explores the controversial life and death of the painter.

Through April 14: The Seoul Museum, a private museum located at the foot of Mount Inwang, central Seoul, opened a new building at its scenic site in November. Celebrating it, the museum presents two exhibitions in the new building, which have been extended until mid April.

One of them is a solo show of French artist Paul Jacoulet (1896-1960). He studied ukiyo-e woodblock prints, which flourished in the 17th, 18th and 19th centuries in Japan. He traveled to Korea several times and visualized his impressions through the ukiyo-e-style prints.

The other is “Walking Man,” which features a new collection of the museum, including “One Hundred of Thousands of Dots 04-VI-73 #316”(1973) by Korean modern art master Kim Whanki (1913-74), who is now the world’s most sought-after Korean artist.

The painting is considered to be one of Kim’s most beautiful “New York era” dot paintings, which are regarded as the peak of Kim’s oeuvre and have set art market records at auctions in Seoul and Hong Kong in recent years.

Admission is 7,000 won for adults and includes admission to Seokpajeong, the summer residence of King Gojong’s father, which is located behind the museum. 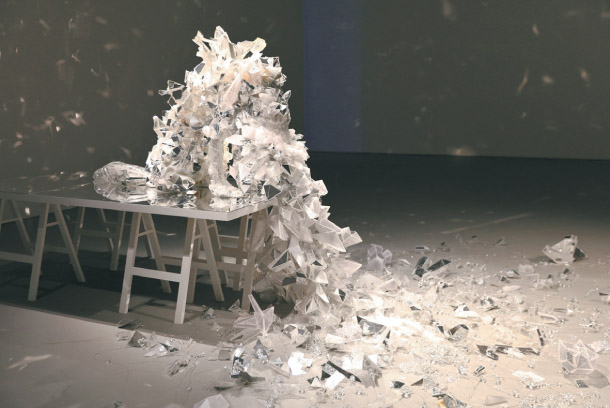 Through May 19: The Amorepacific Museum of Art (APMA), which opened last year in the cosmetics giant’s new headquarters near Sinyongsan Station, central Seoul, presents this exhibition to highlight contemporary art pieces among its collection.