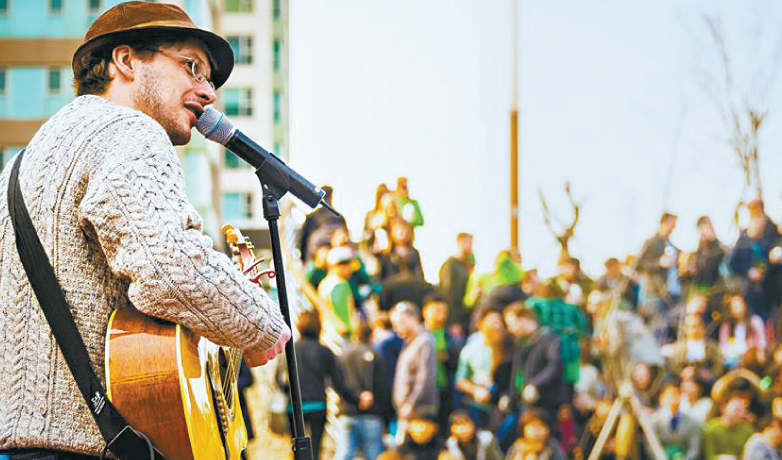 Decked out in green, people gather to celebrate St. Patrick’s Day at last year’s event. This year’s St. Patrick’s Day Festival, hosted by the Irish Association of Korea, will be on March 16 at D-Cube City Plaza in Guro District, western Seoul. [IRISH ASSOCIATION OF KOREA]

From March 8 to May 31: You do not need to go out of the city to enjoy flowers welcoming the warm spring season. Hyundai Department Store’s Sinchon branch is gathering many florists to decorate the shopping center. Fresh flowers will be used to decorate 22 different rooms under four different themes, and visitors will find many picture-perfect scenes throughout the department store.

The exhibition, which runs until May, will change flowers every month to show the variety of plants available in Korea - protea ice queen from South Africa will welcome visitors in March; diamond roses from India, will be on display in April; and the rainbow tulip will fill up the store in May. Couples, friends and families can take photos in front of different flowers and become inspired for their next floral bouquets.

Florists will be on hand and working at the department store to show visitors how florists make floral installations. The flower exhibition will be open from 11 a.m. to 8 p.m. on Tuesdays to Fridays and until 8 p.m. on weekends. It will be open from 2 p.m. to 8 p.m. on Mondays. Admission for adults is 12,000 won ($10.70)and 9,000 won for teens. Tickets are available on Ticket Link, Ticket Monster and Naver Reservation.

March 16: The Irish Association of Korea wants to share Ireland’s rich culture and Celtic history with the people of Korea through a feast of Irish dancing and Irish traditional music. The festivities for this year’s St. Patrick’s Day Festival, whose theme is “An Irish Welcome,” will begin at 1 p.m. and run through 6 p.m.

Saint Patrick is the patron saint and national apostle of Ireland.

Visitors to the festival will get to hear the traditional and modern sounds of Ireland performed by talented musicians and dancers. There will be a variety of instruments like the Irish tin whistle, the fiddle and the accordion.

Visitors will also get a chance to watch a fusion of traditional and modern Irish dance performed by award-winning Korean dancers, while also listening to the sounds of old-style Irish singing and Irish-influenced rock music.

The Irish Association of Korea is a voluntary organization that promotes Ireland and all things Irish in Korea. Founded in 2000, it hosts several big events each year, as well as supporting charity projects.

March 16 to 24: The hot spring district of Mount Jiri will be bathed in a sea of yellow this March as blooming sansuyu, or cornus officinalis, flowers cover the mountain. Around 40 events will be held during the festival. The program includes rituals for a good harvest, performances of Korean vocal music, farmers’ music and dance, as well as demonstrations of traditional cultural arts from around the world. Wine and cake made from the sansuyu flower will also be available. 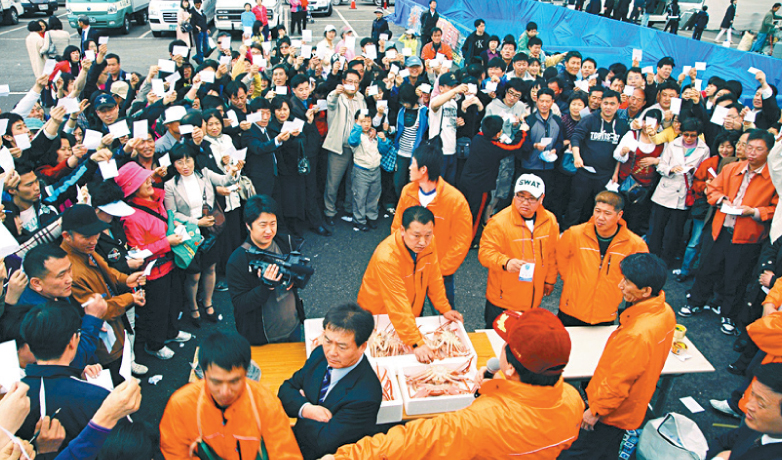 From March 21 to 24: This is the season to eat snow crabs in Korea because after a long, cold winter, they have gotten big and juicy. So pack your bags and head down to one of the most famous snow crab spots in South Gyeongsang - Ganggu Port. Around the port where the festival is held are about 100 shops and restaurants that sell snow crabs and other seafood to fill up visitors’ hungry stomachs. The festival, which celebrates its 22nd edition this year, has other attractions as well, including a re-enactment of the ceremonial walk of King Taejo, as well as a chance to take a boat ride out to catch your own crabs. There will also be an auction for those who want snow crabs to bring back home.

Through early May: Restaurant Soigne, known for changing its entire menu every three months, has unveiled its first tasting menu of 2019, titled “Aroma.” Chef Lee Jun, who is best known for his take on Korean-inspired French cuisine, was inspired to create items on the menu while researching herbs and spices.

The Aroma menu is split into different aromatic groups: earthy, fruity, floral and more. Dishes include an earthy, beetroot and mushroom combination with taleggio cheese foam and horseradish, as well as a quail roulage main with orange and ginger glaze, black garlic, dark chocolate and a saffron and sweet potato mousse.

“One of my favorite dishes from this menu is the rosemary ice-cream with olive oil and carrot cake,” says Chef Lee. “It sits right in the middle of ‘herb’ and ‘spice.’”

Soigne, which opened in 2015, is the only fine-dining restaurant in Seoul to completely change its menu every season. “Aroma” marks the restaurant’s 20th menu. Last year, the restaurant served dishes using the themes “Cuisine of the Three Coasts,” “Korean Wild Greens, Namul,” and more.

The “Aroma” menu will run until early May, and the more detailed date will be notified later. Lunch at Soigne starts at 75,000 won, and dinner is priced from 148,000 won.

A vegetarian menu is also available. Reservations can be made via the website, www.soignerestaurantgroup.com or call (02) 3477-9486.