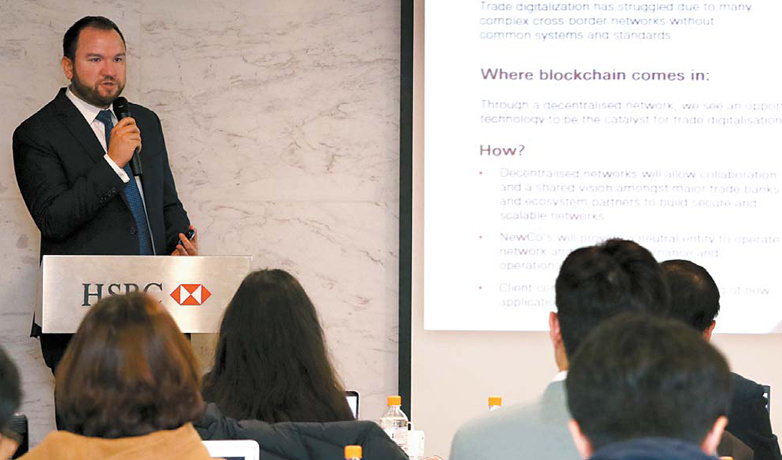 “The future of trade and [the] future of trade finance will be driven by this exciting technology,” said Kroeker on Tuesday, adding that the decentralized trade ledger will revolutionize the current paper-based system.

According to HSBC, it takes roughly five to 10 days to exchange and check trade finance documents. With blockchain technology, the time will be reduced to less than 24 hours, as all players are in sync with information and transactions. Under existing paper documents, trade transactions, including payment, can only be completed when the papers arrive at their destination. A synced blockchain will allow this process to proceed even when exported goods are en route.

“There are a lot of elements in total costs in international trade - the cost of goods, duties, internal costs of operation and the cost of finance, which is related to the length of time in financing and everything that goes along with that, and there’s also fees associated with checking and process documents and extras,” Kroeker said.

“Where you’re going to see the biggest impact is the time. If you had to spend five to seven days extra time before you receive your cash in doing internal process that has internal costs in your operation.”

He said the timelines and transparency from blockchain trade will allow corporations to make better decisions on how they manage their working capital.

Kroeker said while there are three blockchain networks that HSBC is involved in, including We.Trade in Europe and eTrade Connect in Hong Kong, it believes Voltron, which is based on R3s Corda blockchain, would be the most effective for the Korean market. He added that he hopes to partner with Korean banks in expanding this network.

“While this project is supported by eight banks right now, around the world, we do not have a Korean bank yet,” Kroeker said. “And because of the importance of this market to the global trade and how much letter of credit does, HSBC will be of course be involved… we would like to partner with local bank here in Korea as well to make sure we have the scale that’s necessary to be successful.”