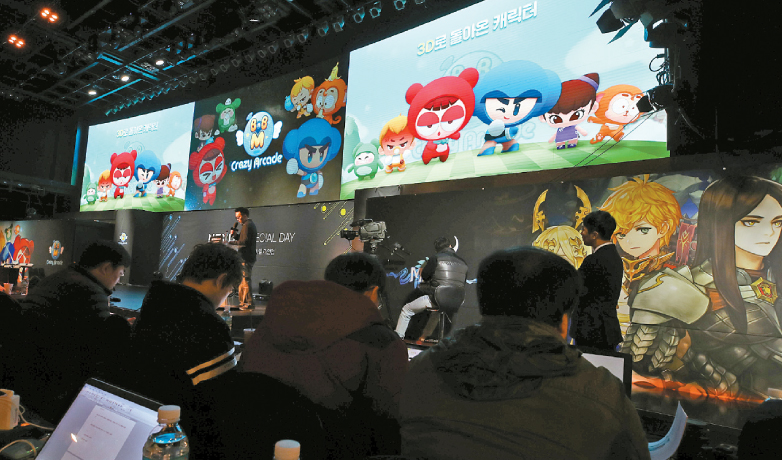 Nexon will release 10 mobile games in Korea and overseas in the first half, including a mobile version of its classic Crazy Arcade BnB.

The game publisher has already released four titles so far this year. Its lineup includes everything from casual games to massively multiplayer online role-playing games (Mmorpgs).

While some are based on the company’s intellectual property library, like Godzilla and Crazy Arcade BnB, others are completely new releases, with fresh story lines and characters. Ten among the 14 will be released outside Korea.

“We’re expecting 2019 to set a record in terms of the number of games we release,” said Nexon Vice President Kim Hyun during a press event on Tuesday.

Seo Yong-seok, a deputy manager at Nexon’s mobile business division, later added that the company was “trying various approaches and game genres in consideration of its entire lineup rather than putting weight on one specific field.”

One big release will be the mobile game version of Crazy Arcade BnB, BnB being short for Bomb and Bubbles. A casual game inspired by Bomberman, Crazy Arcade BnB was originally released as an online PC game in 2001 and was one of Nexon’s earliest successes.

The mobile version stays true to the original, but with graphics upgrades to turn the 20-year-old characters into 3-D images. New modes, like a 16-player tournament, will be introduced to the game. Nexon hopes the release will appeal to users who once enjoyed the PC games years back.

“A lot of people consider Crazy Arcade as a game for children, but the game is 20 years old, which means players who most actively enjoyed it at the time are now grown enough to be parents,” said Jeong Woo-yong, the director that heads Nexon’s mobile Crazy Arcade team.

“I think it’s a genre that users of all ages from children to adults can enjoy now.”

Crazy Arcade BnB on mobile is due for release on March 21 in Korea and overseas.

A mobile version of The Kingdom of Winds, Nexon’s other big 2000s success, will also be launched in Korea during the first half, although the exact date was not disclosed. MapleStory M, another mobile game based on an old Nexon PC game, will release in Japan next month.

The company’s lineup for 2019 also includes a mobile game based on Godzilla. Set for global and domestic release in May, Godzilla Defense Force is a game where players strategically establish bases to protect a city from monsters based on those in the original film series.

A completely new mobile game introduced by Nexon on Tuesday was an action role-playing mobile game titled Magia. It presents four main characters in a fantasy setting. Each character has a different story and will be asked to complete a different quest.