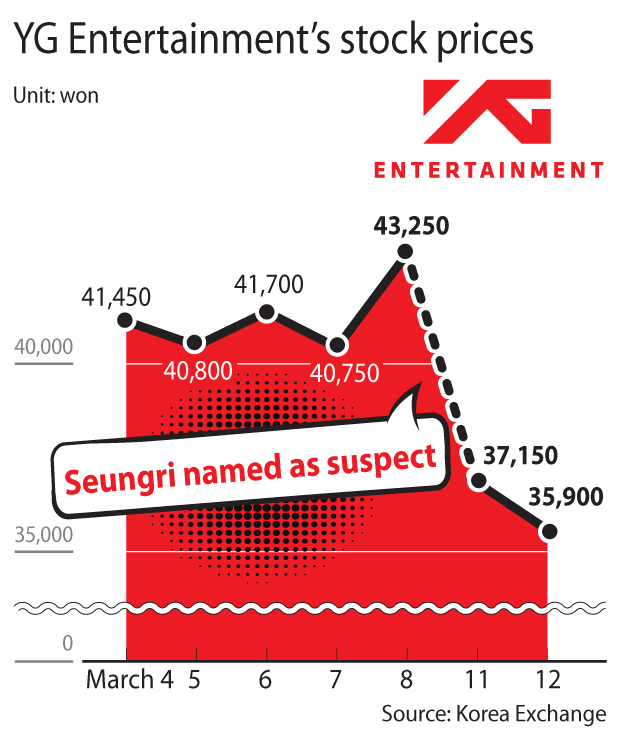 Seungri’s snowballing scandal is taking a toll on the Big Bang singer’s company.

The share price of YG Entertainment fell 3.36 percent on Tuesday to finish at 35,900 won ($31.80) after police booked the star, whose real name is Lee Seung-hyun, for allegedly acting as an agent for prostitution.

On Monday, the day after the announcement, YG’s shares tumbled 14 percent to 37,150 won.

Ever since a November assault at a club linked with Seungri was reported in January, the Kosdaq-listed stock has been on a steady decline.

The ongoing scandal includes claims of sexual assault, hidden cameras, drug use and bribery and has wiped out more than 100 billion won off the company’s market capitalization.

With the drop, YG is no longer the top entertainment company on the Kosdaq, losing that honor to JYP Entertainment and moving to third place.

JYP is seen as valuable due to profitability in recent quarters.

The successful debut of a new girl group is also helping.

“Thanks to rapid monetization, we expect the new girl group ITZY to positively contribute to the company’s earnings in the first quarter,” the analyst said.

Fourth-quarter earnings for both YG and SM disappointed analysts.