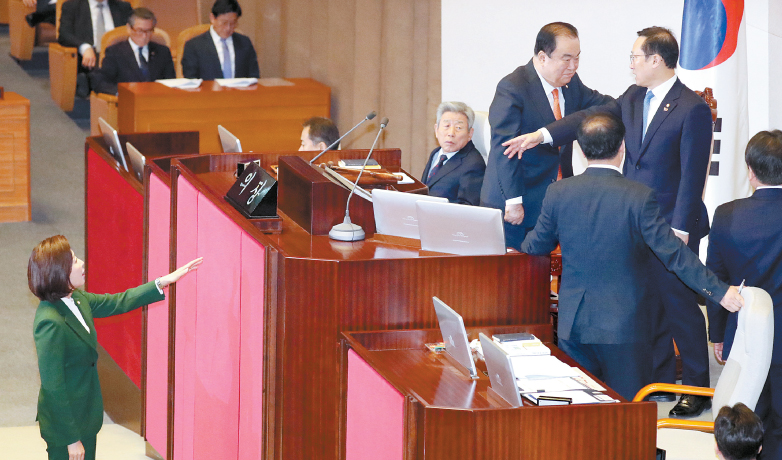 “We no longer want to hear the humiliating rhetoric that the president of South Korea is a chief spokesman for Kim Jong-un,” Rep. Na Kyung-won, floor leader of the LKP, said in a speech Tuesday morning at the National Assembly. Lawmakers from the ruling Democratic Party (DP) shouted at her to stop. Some stormed out of the chamber, and Na’s address was interrupted for 40 minutes as politicians from the two parties engaged in a shouting match.

Stressing that it was confirmed after the second U.S.-North summit in February that Pyongyang has no intention to dismantle its nuclear programs, Na said the Moon administration’s North Korea policy is a “risk gamble.”

“It is embarrassing to see endless, groundless defenses for the North,” she said, adding that the LKP no longer want to hear that President Moon is a mouthpiece for the North Korean leader.

Amid loud bickering, speaker Moon urged Na to continue her speech, while asking lawmakers to remain calm. Lecturing the lawmakers about democracy, he said, “She, indeed, made a controversial remark, but our politics are mature enough to handle this.”

Lawmakers, then, became quiet, and Na resumed her speech only after complaining that the speaker was clearly siding with the DP, of which he used to be a member.

It took Na one hour and 10 minutes to finish her address, which originally was to take 30 minutes.

Following the chaotic session, the DP and the Blue House did not hide their anger at Na.

Han demanded apologies from the LKP and Na.

The ruling party held an emergency lawmakers’ meeting after the speech and decided to ask the National Assembly’s Special Committee on Ethics to consider disciplinary action against Na. “She is guilty of contempt of the head of state,” DP Chairman Lee Hae-chan said. “The party must have a legal review and send her case to the ethics committee.”

Rep. Hong, Na’s DP counterpart, said the party wants to hold her accountable for causing a fuss in the legislature and splitting public opinion. “We will ask the ethics committee to review her remark based on Article 146 of the National Assembly Act which bans insulting remarks inside the legislature,” he said.

The LKP, as well as Na, said her speech was referencing a description of Moon in the foreign media. On Sept. 26 last year, Bloomberg released an analysis piece entitled “South Korea’s Moon Becomes Kim Jong-un’s Top Spokesman at UN.”

The piece said while Kim was not attending the UN General Assembly at the time, “he had what amounted to be a de facto spokesman singing his praises: South Korean Moon Jae-in.” It also said Moon tried to persuade skeptics of Kim and talked about Kim’s strong will to develop the North Korean economy.

The piece stirred controversy at the time and many conservative politicians quoted it to criticize Moon’s North Korea policy.

“What Na said today is a well-known expression from a foreign media report,” Rep. Jun Hee-kyung, spokeswoman for the LKP, said Tuesday. “She was saying that Moon must do better to avoid the label. But the DP cannot accept this message, showing that it is dictatorial and a destroyer of parliamentary democracy.”