President Moon Jae-in ordered Blue House aides on Tuesday to accept a plan to fight pollution drafted by a minor conservative party that would establish a national fine dust agency.

That agency, according to the blueprint, is to be led by Ban Ki-moon, who formerly served as the only Korean secretary general of the United Nations.

Blue House spokesman Kim Eui-kyeom said in a statement issued to reporters that Moon told his chief of staff for policy, Kim Soo-hyun, to “wholeheartedly accept” the plan as he was briefed about it during his trip to Brunei on Tuesday. 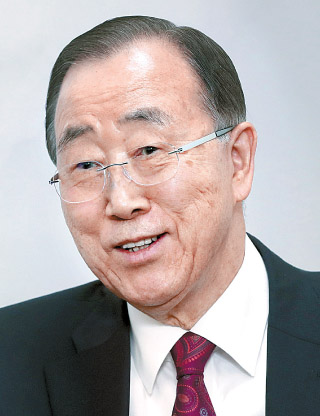 Based on Moon’s order, Kim Eui-kyeom said the Blue House decided to ask Ban whether he was willing to take the offer and review how the new fine dust agency will establish its relationship with the special fine dust committee that is already operating within the Prime Minister’s Office.

That special committee is considered to be Korea’s leading authority on fine dust issues.

Moon’s order came as fine dust has been choking Korea’s air for days and amid public outcry that the government is failing to confront China about it, despite studies that show China is at least partly to blame. Beijing has long denied any responsibility for Korea’s filthy air.

Fearing that the environmental problem could develop into a diplomatic clash between Korea and China, Sohn Hak-kyu, chairman of the minor opposition Bareunmirae Party, said Monday in a party meeting that the government should devise a long-term solution that responds to the fine dust issue on “a global level.” Sohn proposed establishing a fine dust agency involving the National Assembly, government and various sectors of society, stressing that Ban would be a perfect fit to lead the agency.

Some critics denounced the proposal as a political ploy to entice Ban into the Bareunmirae Party. The party was founded in February 2018 through a merger between the Bareun Party and the People’s Party. The Bareun Party was formed in January 2017 by conservative lawmakers who defected from the Saenuri Party - the predecessor of the main opposition Liberty Korea Party - after the revelation of the scandal that ended the Park Geun-hye presidency. The Bareun Party once toyed with the option of recruiting Ban and making him the party’s candidate for the May 2017 snap election for Park’s successor.

But Ban, after three weeks of campaigning as an independent, dropped out of the race in early February amid mushrooming questions over his political skills and qualifications. At a press conference announcing his exit from the race, Ban vented frustration at politicians for being “very selfish” and at the “fake news” media for tarnishing his reputation. Political analysts now wonder whether he would be up for the new post as fine dust chief.

A career diplomat who climbed the diplomatic ranks for decades after passing the national foreign service exam in 1970, Ban was Korea’s foreign minister from 2004 to 2006 in the progressive Roh Moo-hyun administration. He became secretary general of the UN in 2007 and served until 2016.