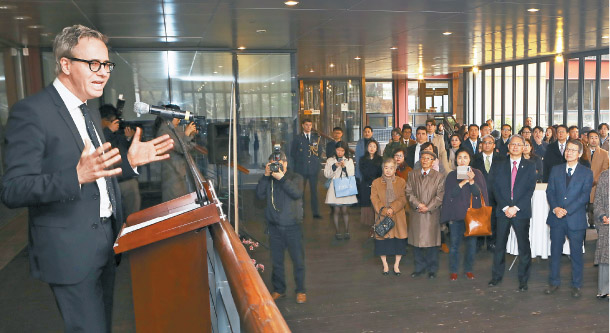 Swedish Ambassador to Korea Jakob Hallgren speaks at the premiere of “The Swedes in the Korean War,” a documentary on the Swedish Red Cross Hospital in Korea during the Korean War. The screening was held on Monday at the Seoul Museum of History in central Seoul to celebrate 60 years of diplomatic ties between Sweden and Korea. [PARK SANG-MOON]

To celebrate Sweden’s 60 years of relations with Korea, the Swedish Embassy in Seoul on Monday hosted the premiere of “The Swedes in the Korean War,” a documentary on the Swedish Red Cross Hospital in Busan.

“The beginning of the bilateral relations on this special date of March 11 of 1959 was formed out of many episodes in history,” said Swedish Ambassador to Korea Jakob Hallgren in his speech to the audience at the Seoul Museum of History in central Seoul on Monday.

Sweden, which remained neutral during the war, sent some 1,200 nurses and doctors throughout the war and until the conclusion of the field hospital’s mission in 1957.

A year before its conclusion, however, the Swedish government, in cooperation with the Norwegian and Danish governments, which had also dispatched medical staff to Korea, agreed to build a hospital for medical aid and education for the locals. The hospital is today the National Medical Center in central Seoul.

“The hospital, at the time, exposed Korea to the developed medical skills of Europe for the first time,” said Jung Ki-hyun, head of the National Medical Center.

“It [became] the first public medical center of Korea. A message in the documentary is that we cannot forget what happened during the war and the memories we formed with friends from abroad. The medical center will remember its roots well and strive to be a backbone for public health care in Korea.”

The documentary, produced by the Swedish Army, Navy and Air Force Film Foundation, sheds light on the memories of dozens of Swedish doctors and nurses who recalled the patients they treated and friendships they formed in Korea.

One of them was Kim Hak-tae, who was around 15 when he was treated.

“I was suffering from osteomyelitis in my left leg,” said Kim, who attended the documentary screening. “I was treated at the hospital, and voila, I could play volleyball and other sports with no problem.”

Other patients spoke to the producers about what it meant to receive life-saving treatments from the hospital.

Some friendships formed across cultures that lasted beyond the field hospital’s presence in Korea. The documentary producers were able to speak to some Koreans who moved to Sweden, following their Swedish friends to their homeland.

The film also shed light upon some challenges the Swedish hospital faced as a neutral presence in South Korea during the war, as it also treated North Korean prisoners of war.

“It is how any country would wish for their soldiers to be treated,” one Swedish woman, who served as a nurse in Korea during the war, said in the film.

Sweden, which is still a member of the Neutral Nations Supervisory Commission in Korea, has a diplomatic presence in the inter-Korean border area of Panmunjom as well as both Koreas.

To celebrate the 60th anniversary of ties with Korea, the Swedish Embassy in Seoul is also hosting a monthly public lecture throughout the year on various topics related to bilateral relations, including cooperation in the innovation and start-up industries.