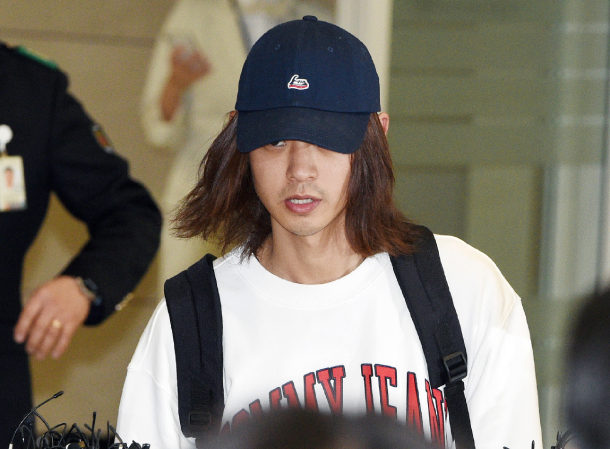 Singer Jung Joon-young was charged with shooting and distributing sex videos of women in 2015 and 2016 on Tuesday, and returned to Korea from the United States to face questioning.

After a raunchy KakaoTalk conversation between eight people including Jung and Big Bang member Seungri went viral Monday, SBS reported later that evening that Jung had taken illegal sex videos without the women’s consent and shared them multiple times to the same group chat.

“Jung Joon-young uploaded videos and photographs he took illegally on multiple occasions to a KakaoTalk chat room for himself, fellow celebrities and other acquaintances,” SBS 8 News reported. There were videos of at least 10 women shared by Jung, according to the news report.

SBS funE reported Monday morning that a man surnamed Kim shared a 20 second-long illegal sex video in 2015 that Seungri casually commented on. A follow-up report that evening said that Jung had been actively taking videos of himself having sex with women and sharing them through the chat app, which SBS discovered during its probe of a sex and drugs scandal involving Seungri.

In a conversation in early 2016, Jung tells Kim, “I had sex with [name deleted].” When Kim asks, “Don’t you have a video [of her]?” Jung sent a three-second video of himself and the woman. He frequently shared pictures of women’s bodies, both celebrities and non-celebrities, according to SBS.

Jung, 30, has not made a statement but was scheduled to arrive at Incheon International Airport at 5 p.m. “to sincerely cooperate with the police investigation,” according to his agency, Makeus Entertainment. Jung was in the United States shooting season three of tvN’s cooking show, “4 Wheeled Restaurant.”

The Seoul Metropolitan Police Agency announced Tuesday that they charged Jung with violating the Act on Special Cases Concerning the Punishment etc. of Sexual Crimes. According to police, Jung shared his videos through multiple KakaoTalk chat rooms, including the one with Seungri. The police will soon call Jung in for questioning.

KBS and CJ ENM announced Tuesday they will remove Jung from the casts of ongoing shows “2 Days & 1 Night,” “Salt Tour” and “4 Wheeled Restaurant” and edit him out of scenes already shot.

A past incident also resurfaced. Jung was accused by a girlfriend of taking an illegal sex video of her in 2016, but the police closed the case for lack of evidence when they couldn’t find the phone Jung used.

The singer took three months off from television appearances, but soon returned. In a press conference, Jung claimed the video was taken consensually and the girlfriend was labeled a “gold digger” in some reports.

According to a report by local news outlet Dispatch on Tuesday, Jung told friends that he will “go and pretend to be sorry” before attending the press conference in 2016.

Seungri, 28, who announced Monday he will retire from show business due to the recent scandals, was booked by police Sunday for soliciting prostitution in 2015. He was questioned by police on Feb. 27. He is scheduled to begin his military service on March 25, but investigations will carry on. He is banned from leaving Korea.

Meanwhile, singer Yong Jun-hyung of boy band Highlight said he was not involved after SBS reported Monday that a celebrity surnamed Yong was in the raunchy group chat. According to his explanation, he did talk to Jung through a different chat room, but not in the one with Seungri.

“I looked back on myself, that I had my name involved in such a case – regardless of the facts,” said Yong. “The report is not true at all, and I hadn’t even been aware that such things were going on at the time. You may think that I was wrong to just answer [Jung] without thinking about it. I will be thinking more carefully about my actions and words.”