Dreaming of white rice and beef

Dreaming of white rice and beef 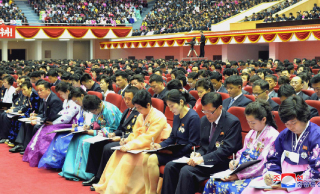 At the second national convention for junior propaganda officers in Pyongyang last week, North Korean leader Kim Jong-un said his father and grandfather’s lifelong wish was to create “a country where everyone gets to eat white rice with beef soup.” [YONHAP]

How precious was beef under the Joseon Dynasty (1392-1910)? Research by environmental historian Kim Dong-jin shows it was actually quite common. “Seugjeongwon Diary,” written in January 1675, the second year of King Sukjong’s rule, states that, “No fewer than 1,000 cows were butchered a day in markets in Seoul and other parts of the country.”

Based on this, Kim estimated annual beef consumption per person. “1,000 cows a day add up to 365,000 cows a year. For the Lunar New Year, Dano, Chuseok and Dongji holidays, an additional 20,000 to 30,000 cows were butchered. So, at least 400,000 cows were consumed a year. Cows at the time were smaller than modern breeds. Assuming that they weighed about 300 kilograms [661 pounds] — half of today’s Hanwoo breed, which weigh 600 to 700 kilograms — one cow would yield 150 kilograms of beef. The total beef consumed from 400,000 cows would be 60 million kilograms. As the population at the time of the king was 15 million, each Korean consumed 4 kilograms of beef a year. That is equivalent to the consumption level in the mid-’80s in Korea.”

It doesn’t seem that only the royal family and aristocrats indulged in beef. “There are records of constantly butchering cows to treat guests and to eat,” wrote Kim in his book “Joseon, Falling for the Taste of Beef.”

How about rice? Western missionaries in the late Joseon period recorded that they were surprised at the amount of food Koreans were eating, noting the amount of rice in a big bowl. Kim concluded, “Except for years of extreme famine, rice and beef soup were not so rare.”

But after the plundering of Korea’s food during the Japanese occupation, rice with beef soup became a synonym for the ideal life. The utopia that former North Korean leader Kim Il Sung advocated in 1962 was “a country where everyone gets to eat white rice with beef soup.”

Fifty-seven years have passed since. Yet “white rice with beef soup” is still a distant goal. North Korean leader Kim Jong-un recently said at a recent national convention for junior propaganda workers in Pyongyang that it was Kim Il Sung and Kim Jong-il’s life-long wish to have the entire nation enjoy white rice with beef soup, wear silk clothes and live in good homes.

Can Kim Jong-un make the dream a reality? He has seen the solution in Vietnam. Vietnam can grow two or three crops of rice a year, but it had once imported rice because of inefficiencies of collective farming.

Vietnam overcame the slump via the reform and opening policy of Doi Moi. In the late ’80s, it became a food exporter. Kim has witnessed the changes to the Vietnamese economy. I wonder what choice he will make to attain the goal of white rice with beef soup.