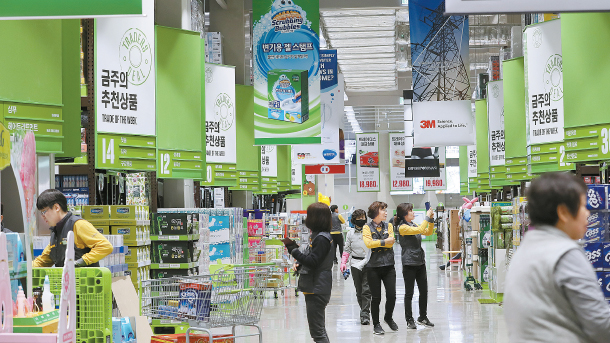 Located in Wolgye-dong, northern Seoul, it offers a wide range of products at low prices - cheap enough to compete against e-commerce operators, the company said prior to the official opening on Wednesday. It is the 16th branch of Traders. The first was established in 2010 in Yongin, Gyeonggi.

“We have high hopes for the Wolgye location,” said Min Young-sun, a vice president at Traders. “We put in a lot of effort into developing products and discovering brands that can’t be found elsewhere. We paid particular attention to fresh produce and instant foods.”

Wolgye Traders is especially proud of its Australian wagyu beef and fresh salmon, which will be offered at prices around 40 percent lower than those at department stores, the company said. Traders-produced Korean meals like gamjatang (pork bone stew), which are ready-made, is another line the firm hopes will lure customers.

A sales goal of 14 billion won ($12.3 million) has been set for the Wolgye branch of Traders this year. 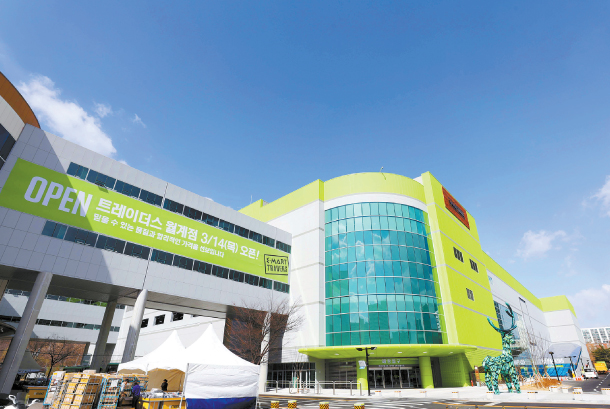 The exterior of the Seoul branch of Emart Traders. [YONHAP]

Emart decided Wolgye was the right spot for the first Seoul Traders because Emart Wolgye had a parking lot separate from the mall.

“The parking for most Emarts is located in the same building, but the Wolgye branch had a separate parking area, providing the needed land and space for Traders,” said a source from Emart. The company, which is part of the Shinsegae Group, is reviewing plans to open additional branches in Seoul. Future Seoul branches could be built on their own without a companion Emart, the source added.

“Traders is a new engine of growth for Emart,” said a Traders spokesperson.

Total sales for Traders this year are forecast to hit 2.4 trillion won. The company hopes to boost sales to 10 trillion won by 2030.

A big part of the growth strategy is the Starfield shopping complex. The Hanam branch of Traders in Gyeonggi is located inside Starfield Hanam, offering visitors both shopping and entertainment facilities.

Amid the intense competition between Traders and Costco, Homeplus is also ambitiously promoting its big-box warehouse business. In June last year, it opened the Homeplus Special store in Mok-dong, western Seoul. It combines the bulk discounts of a warehouse retailer with a conventional grocery store experience. The company now has 16 Special stores, and the total will be increased to 30 branches by the end of this year.