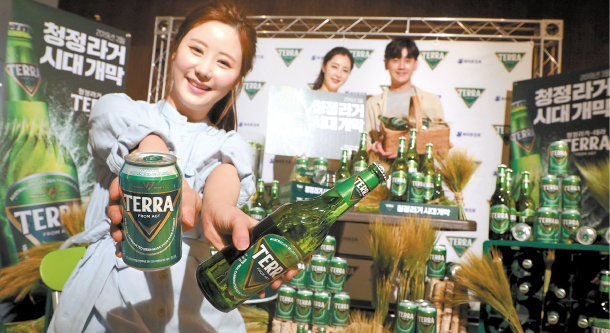 Hite Jinro will launch Terra, its first new beer in six years, next week, taking an environmentally friendly approach in the hope of boosting its struggling beer business.

Terra, the result of five years of research and development, is Hite Jinro’s attempt to pull its beer business out of the red for the first time since 2014.

Contrary to its successful soju business, which leads in market share, Hite Jinro’s beer business has been struggling for years. Its main product Hite was once the market leader but was pushed down to No. 2 by rival Cass in 2012 and has stayed there ever since.

Hite Jinro’s market share for beer at the moment is around 30 percent.

The increasing popularity of foreign beer in Korea in the last few years has added to Hite Jinro’s woes. Local convenience stores and discount chains have compounded the problem with massive discounts and long-running promotional events on imported beer. The recent rise of craft beer has only made matters worse.

“In the last few years, Hite Jinro’s beer business saw its market shares fall due to fierce competition, the rush of imported beer and a rapidly changing drinking culture,” said CEO Kim In-gyu during a press event on Wednesday in central Seoul. “The new release aims to put an end to the difficult times. From that perspective, Terra marks a new start for Hite Jinro.”

The lager is made using barley produced in a region of Australia called the Golden Triangle, which the company explained has a clean and unpolluted environment and the right amount of rain and sun to produce barley.

Hite Jinro’s chief marketing officer, Oh Sung-tak, said that the Golden Triangle was chosen due to rising public concern about environmental issues. The move toward a greener beer doesn’t end there - unlike other beers that have carbon artificially added to the bottle, Terra only contains carbon naturally produced in the fermentation process.

To emphasize its clean image, Terra’s packaging was designed to be predominantly green. Most domestic beer brands - including Cass, Hite and Lotte Liquor’s Cloud - come in brown glass bottles.

Terra has an alcohol content of 4.6 percent, similar to other existing lagers on the market. Its pricing will also be similar to its rivals. The official release date is March 21.

“Our goal for Terra is to take a market share in the double digits this year,” said Oh.

“Sales of new lagers are hard to predict. For Hite, we saw sales rocket in the first two years. We’ll have to see what happens with Terra, but we are prepared with ingredients and facilities to respond to robust growth.”