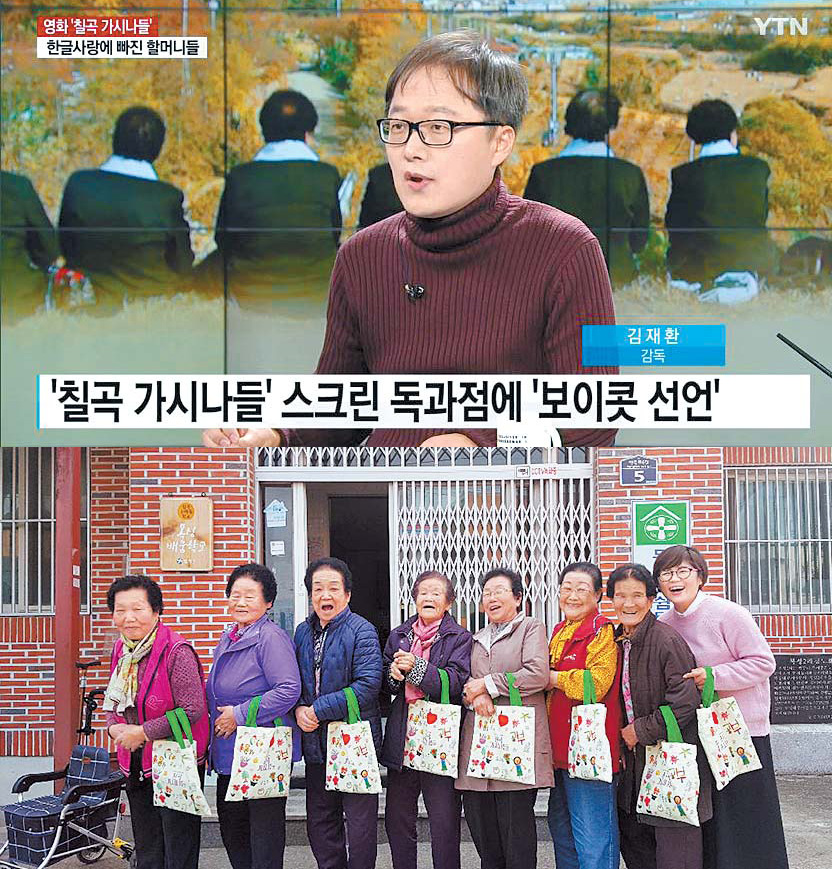 During an interview with YTN last Friday, director Kim Jae-hwan, left, talks about his film “Granny Poetry Club” and how he felt it was allotted an unfair number of screens in CGV. [SCREEN CAPTURE]

Last Friday, Kim Jae-hwan, the director of the low-budget documentary “Granny Poetry Club” appeared on news network YTN and accused the nation’s movie theater chains of monopolizing screens across the country. According to a statement released by the director on Feb. 27, Korea’s biggest multiplex chain CJ CGV told him that his movie would only be allotted “eight screens at eight theaters, out of a total of 1,182 screens at 159 CGV locations nationwide.” Moreover, Kim said that CGV told him it would “be ‘flexible’ in deciding the number of screenings each day, depending on [the movie’s] performance after its release.”

“Meanwhile, the [film ‘Trade Your Love’] was produced with a similar budget [and also released on the same day],” Kim told YTN. “But that film will play in [140 screens at 95 CGV theaters]. The only possible reason that I can think of is the fact that the film’s distributor is CGV Arthouse.”

He added that although he was asked by CGV to not release a statement and offered more screens, he declined because he thought “many others [like him] have probably gone through a similar experience.”

“The problem is, although I will be able to earn more money if my film plays in more theaters, where would all those extra screens come from? Probably from other low-budget, independent films. This may not be a legal problem, but to me, CJ CGV is morally corrupt.” 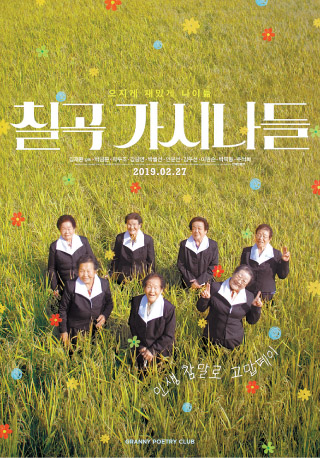 The documentary film tells the story of seven grannies, above, who fall in love with learning hangul at a late age. [INDIEPLUG]

For that reason, the director decided to boycott two of the biggest Korean movie theater chains - CJ CGV and Megabox - for what he says is an unfair screen allotment system.

For over 10 years, corporate giants like CJ Group - which owns film distributor CJ ENM and multiplex chain CJ CGV - and Lotte Group - which owns both Lotte Entertainment and Lotte Cinema - have been criticized for using the majority of screens at their theaters to show films both made and distributed by affiliates of their own companies and depriving smaller, independent films from the opportunity of having a wide release.

One of the most controversial cases of screen monopoly was CJ ENM’s 2017 film “The Battleship Island,” which was played at 2,027 screens out of an estimated 2,700 screens nationwide. Since 2013, CJ CGV has dominated about half of Korea’s total box office market share, according to the Korea Film Council. This was the first time a movie was shown in more than 2,000 theaters, and there was a public outcry against the lack of options that moviegoers had once the film was released.

CGV says that “screen allotment really depends on the audience’s demand over a particular movie - if that movie turns out to be popular, we have no choice but to open up more screens.”

A representative from CJ ENM said that “Neither production companies nor distributors are able to interfere in the screen allotment process.”

The problem, according to Prof. Park Kyung-sin from Korea University School of Law, is weak regulations regarding monopolies in Korea.

“The reason why [the issue over] vertical integration continues is because conglomerates want to maximize their commercial profit,” he said. “The current [Korea’s Monopoly Regulation and Fair Trade Act] regulates two things. First, it regulates a company that holds market dominating power from abusing its power. And second, it prevents several companies that don’t hold market power from colluding to stop the regulation itself. But currently, [the first one] is dead.”

According to lawyer Jang Seo-hee from the Fair Practice Establishment Center from the Korea Film Council, “vertical integration itself is not illegal under the Korea’s Monopoly Regulation and Fair Trade Act. Article 7 of the act restricts the act of ‘competition’ listed in the article, but it does not restrict the structure of the ‘combination’ of businesses itself. That’s why vertical integration itself is not a problem according to the law - which leads to continuous conflict [among businesses and film industries].”

Meanwhile, lawmakers have tried to write legislation to ban vertical integration many times over the years, without much success.

In 2016, Do Jong-hwan, the current minister of culture, sports and tourism, proposed a bill when he was an opposition legislator, banning vertical integration of film distributors and theater chains to regulate screen monopoly. The bill, however, was never passed. In 2017, legislators Jo Seoung-lae and Ahn Cheol-soo also proposed an amendment to the Promotion of the Motion Pictures and Video Products Act, clarifying the dissolution of vertical integration. The amendment, however, was cut last June.

Prof. Park believes that the reason these bills fail to pass is “because of conglomerates’ lobby[ing efforts].”

The issue was raised again a few days ago when the Korean Council of Cineastes for Cultural Diversity and Monopoly Regulation released a press statement urging the government to withdraw its nomination of CJ ENM’s non-executive director Park Yang-woo as the new minister of culture, sports and tourism.

“Four out of six board of directors at CJ ENM were high-ranking public officials from the Ministry of Culture, Sports and Tourism, the Ministry of Science and ICT, the Fair Trade Commission and the Korea Communications Standards Commission. Park was one of the four and he has long been in support of screen monopoly and vertical integration.”

Culture critic Lee Moon-won argues in a column for the Korea Economic Research Institute that vertical integration is simply part of a capitalist market system. “Those who argue that conglomerates with vertical integration are the only ones who carry out screen monopoly become speechless when it comes to [major] distributor NEW, which is not connected to any multiplex chains. Distributors are simply trying to find their best, profitable way of distributing films.”