The city government of Seoul will invest around 1.4 trillion won ($1.2 billion) through 2022 to make the city smarter, Seoul Mayor Park Won-soon announced Wednesday.

“Before the term ‘smart city’ came to be used more extensively, Seoul was already going smart,” said Park at a press conference at Seoul City Hall on Wednesday. 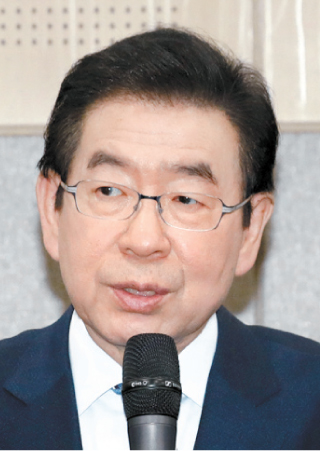 “For instance, we created the Topis, a big-data system to collect information on public transportation and to provide that information to commuters in real time.”

The city government’s Transport Operation & Information Service (Topis) provides information on when a bus is coming to a bus stop, how many seats are available on the bus, when the next subway is coming, where to stand in the subway to transfer faster, where road traffic is heavy and more.

The Seoul Metropolitan Government defines “smart” as any initiative that applies fourth industrial revolution technology, including the Internet of Things (IoT), for the convenience of residents.

Other existing smart city initiatives include the mayor’s office, which integrates information on traffic, disasters and accidents in the city and delivers the information in real time to the mayor on a screen; the city government’s underground fiber-optic cable network, which utilizes subway tunnels that extend throughout most of the city; Wi-Fi connections in most subway stations; and late-night buses, whose routes were planned using the records of cellphone usage and public transportation cards during late-night hours.

“So why more smart city policies at this juncture, you may ask,” Park said. “Half of the world is living in cities. The speed of urbanization will only increase over time. Smart city initiatives can help solve problems common to many cities in the world. They relate directly to people’s daily lives and welfare.”

The city government’s initiatives through 2022 include installing 50,000 IoT-equipped sensors throughout the city to collect information on fine dust, noise, wind and sources of light in each area.

“Using the information, we can find out where we will have to install additional street lights,” said Kim Tae-kyoon, director general of Seoul’s Smart City Policy Bureau. “We can also determine the areas where cabs are most needed at each hour and share this information with cab drivers, find out which public parking spaces are available and share this information publicly and even determine which way the wind blows in an area so that future construction projects take the data into consideration to be built in more environmentally friendly ways.”

The city government of Seoul earlier in the year also designated two districts in the city, Seongdong District in eastern Seoul and Yangcheon District in western Seoul, as so-called testbed districts for smart city initiatives.

In Yangcheon District, the homes of 1,200, mostly elderly, people living alone will be equipped with an IoT program that will alert a local social worker to check on the resident when there is no change in electricity usage.

“Some people worry that the fourth industrial revolution will take over our jobs,” said Yangcheon District Mayor Kim Su-young. “But honestly, at this point, the need to save time in administrative tasks is greater. The technology will help us improve the lives and welfare of the people significantly.”