Experience counts on the links

Experience counts on the links 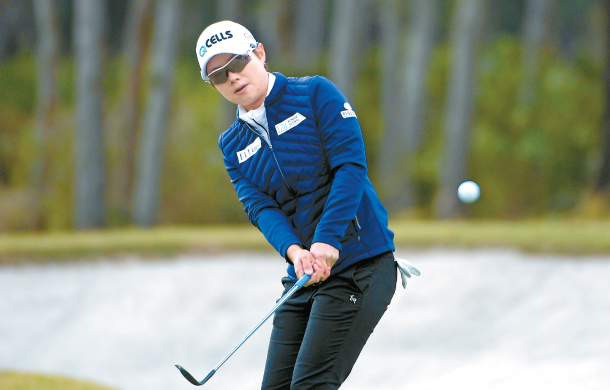 Ji Eun-hee watches her chip shot during the Diamond Resorts Tournament of Champions presented by Insurance Office of America in January. [AP/YONHAP]

In Korea, golf is generally seen as a young woman’s sport.

Professional Korean golfers tend to be much younger than their international peers and often choose to retire earlier, but there are some advantages to a little seniority. As the oldest Korean on the LPGA, Ji Eun-hee takes experience and wisdom out with her on the links.

Ji, who made her LPGA Tour debut in 2007, is playing her 13th season on the Tour, and after Yoo Sun-young lost her status card on the LPGA Tour last year, Ji is now the oldest Korean golfer.

Ji has only played in three tournaments so far this season, but it is already shaping up to be her best yet. She started the season by winning the season opener, the Diamond Resorts Tournament of Champions presented by Insurance Office of America, in January to pick up her fifth LPGA Tour victory. Following her win, she finished fifth at the Honda LPGA Thailand and seventh at the HSBC Women’s World Championship.

Her success this season truly comes from hard work. Following Ji’s impressive victories at the 2008 Wegmans LPGA and 2009 U.S. Women’s Open, she got in a long slump. In a bid to improve her play, Ji rotated through a number of different styles of swing to try and give herself an edge. This approach didn’t immediately pay dividends and critics were quick to question whether the constant changes were causing the slump, not fixing it.

Ji stuck with her decision, however, arguing that “even top pros all have coaches and work on their swing. There is no such thing as perfect golf. No matter how much I do, I still feel like there’s room for improvement so I have to keep trying hard.”

Eventually, Ji’s patience paid off. She finally picked up a win in October 2017 at the Swinging Skirts LPGA Taiwan Championship. Then in March last year, she won another at the Kia Classic. With another win this year, Ji seems to have finally gotten herself out of the slump.

Over the winter, Ji has once again changed her swing. This time, she seems happy with the change.

“I changed a lot last winter so I was worried,” Ji said. “But as I started to see better results, I gained confidence.”

Ji’s victory in January is all the more impressive as it allowed her to set a new record among Korean golfers. By winning the tournament at 32 years and nine months old, Ji became the oldest Korean golfer to ever win an LPGA Tour event. The record was previously held by Pak Se-ri, when she won the 2010 Bell Micro LPGA Classic at 32 years and eight months old.

As there aren’t that many Korean golfers who have been successful on the LPGA Tour in their 30s, Ji’s victory certainly got a lot of attention.

“Rather than the pressure of being the oldest golfer, it motivates me to work harder when I watch the younger players,” Ji said. “I want to win one tournament each year and play on the Tour as long as possible. In Korea, the early to mid-20s seems to be the peak time of [a golfers’] career, but in the United States there are players like Cristie Kerr who still win tournaments at 40 or older.”

Beth Daniel of the United States is the oldest golfer on the LPGA Tour history to win a tournament, at age 46 years and 8 months old. She won the 2003 BMO Financial Group Canadian Women’s Open.

Compared to the LPGA Tour record, Ji is still very young, but the average age has certainly been dropping in recent years, with more and more young golfers dominating the Tour.

Despite the fierce competition, this season Ji’s goal is to win the U.S. Women’s Open.

“Of the five major tournaments, the U.S. Women’s open is the most prestigious and the biggest,” Ji said. “Since this year will be the 10th year since I [first] won it in 2009, I think it would be nice to win it again.”

In addition to her second title at the U.S. Women’s Open, Ji has also set her sights on winning the Tour’s money ranking.

Although Ji has only competed in three tournaments this season, she is already ranked third in the official money ranking. Her previous best was in 2009, finishing 13th.

“I seriously considered retiring when I was in a slump,” Ji said. “But as I went through that tough time, I saw myself developing from it. By winning the season opener, I started to think that I can have more fun playing golf. Golf is still fun and I want to play better.”